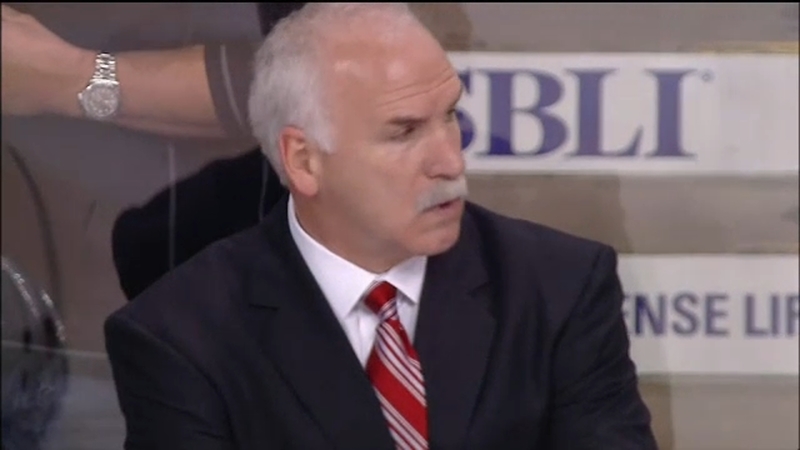 Joel Quenneville resigns from Panthers in wake of Blackhawks scandal

CHICAGO (WLS) -- Former Chicago Blackhawks coach Joel Quenneville is the latest to resign from his post in the wake of the team's sexual assault scandal.

The Florida Panthers announced Thursday night that Quenneville, affectionately known as "Coach Q," has "resigned from his role with the club."

The Florida Panthers announced today that Head Coach Joel Quenneville has resigned from his role with the club.

An interim head coach announcement will be forthcoming.https://t.co/h6Bv3OVdFk

Beach came forward Wednesday night to state he was the 'John Doe' at the center of the team's sex assault investigation. His lawyer says the organization remains in denial, fighting him in court.

Beach released his first statement on social media Thursday, in a tweet reading, "I have immense gratitude for the outpouring of endless love and support that has come through within the past 48 hours. Although the results of the private investigation have been released, and the Blackhawks have apologized, my battle is really just beginning as the Blackhawks continue to attempt to destroy my case in court. While I take this time to reflect and continue the healing process, it is a reminder that this is not about me as an individual. This is to promote open communication that will facilitate change for the future- to promote safety, as well as the health and well being of society as a whole. Thank you"

Beach, 31, was drafted by the Blackhawks in 2008. He came forward and asked his identity be revealed on TSN in Canada the day after the team's general manager Stan Bowman resigned following the result of the investigation into his sexual assault report.

"I know I'm not the only one," Beach said. "Male or female. And I buried this for 10 years. 11 years. And it's destroyed me, from the inside out. And I want everyone in the sports world, and the world, to know that you're not alone."

His attorney said there's no way team management didn't know about the abuse and harassment Beach suffered at the hands of team video coach Brad Aldrich.

The Blackhawks released details of an independent investigation Tuesday that found the organization waited three weeks during their Stanley Cup season in 2010 to look into allegations by Beach that Coach Brad Aldrich sexually assaulted him.

Beach came forward after filing a lawsuit over the mishandling of the situation.

"The Blackhawks filed more papers to dismiss the case," she said. "So even though they said in their statement that they have instructed their lawyers to try to work out a settlement, I doubt that's going to happen because they are so speaking out of both sides of their mouth."

Aldrich would leave the team after the Stanley Cup celebration, eventually heading back to his hometown where he was convicted of sexual abuse of a minor in 2013, for assaulting a 16-year-old high school player. Aldrich is now a registered sex offender in Michigan.
"I'm sorry," Beach said about that assault. "I'm sorry I didn't do more when I could. To make sure it didn't happen to him. To protect him."

A months-long independent investigation has verified the allegations which were first made during the Hawks' Stanley Cup run in 2010. Along with Bowman's resignation Tuesday, the club was fined $2 million.

The Blackhawks issued a statement Wednesday saying, in part, "We would like to acknowledge and commend Kyle Beach's courage in coming forward. Our deepest apologies to him for what he has gone through and the organization's failure to promptly respond when he bravely brought this matter to light in 2010. No playoff game or championship is more important than protecting our players from predatory behavior."

A statement from the Chicago Blackhawks pic.twitter.com/x1XbMXDiyA

As the fallout continues so has reaction from fans and politicians alike. State Rep. Jonathan Carrol (D-Northbrook) called for the state to launch its own investigation.

"I am calling for a complete and total investigation into this, why the ball was dropped, why this guy was allowed to coach even after the allegation," he said Thursday. "And as someone who got into hockey because of the Blackhawks, I'm disgusted and I will not step foot into that place until this is dealt with properly."

The team said numerous changes have been implemented within the organization.

Just two current Blackhawks were on the team in 2010, and Patrick Kane was one of them.

He spoke to the media Wednesday night, saying he hadn't had time to watch the interview but praised Beach while denying that he had any knowledge of what allegedly happened.

Kane also said, while seeing Stan Bowman resign was difficult, it was the right thing for him and the franchise.

The head of the National Hockey League Players' Association also released a statement Wednesday night that said in part: "The grave nature of this incident should have resulted in further action on our part. The fact that it did not was a serious failure. I am truly sorry, and I am committed to making changes to ensure it does not happen again."

Bettman also is arranging a meeting with Winnipeg Jets general manager Kevin Cheveldayoff -- a Blackhawks front-office member in 2010 -- and in a statement on Tuesday, the commissioner said he would "reserve judgement" on both men until they get the chance to speak.