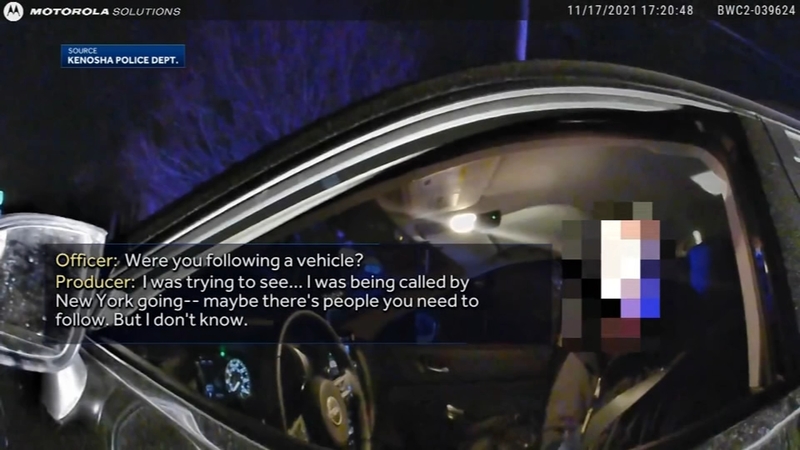 KENOSHA, Wis. (WLS) -- Kenosha police body camera video shows the encounter between an officer and a member of the media during the Kyle Rittenhouse trial.

Authorities said the man was trying to follow the vehicle transporting the jury from the courthouse.

OFFICER: What is the significance of you being here?

PRODUCER: I work for NBC.

On November 17, jurors in the Kyle Rittenhouse trial had just wrapped their second full day of deliberations. They left the courthouse in an unmarked van that police say was being followed.

OFFICER: Were you following the vehicle?

PRODUCER: I was trying to see, I was being called by New York going, maybe these people you need to follow, but I don't know. It was discreet, I wasn't like going to talk to anybody, just trying to find a location. That's all.

The officer asked to speak with the producer's boss.

OFFICER: This is Officer Jones, Kenosha Police. We're trying to figure out what's going on here. Why you have a reporter or producer following vehicles out here?

NBC EMPLOYEE: By no means were we trying to get in contact with any of any of the jury members or workers in the car. We just were, um, trying to see like where, where key players in the trial may be at.

OFFICER: This is huge. We can't afford anything crazy happening, putting people in dangerous positions. Um, this individual violated traffic laws here doing this. So we're going to ask you guys to refrain from doing that.

NBC EMPLOYEE: Got it, understood. Thank you so much. Very sorry, very sorry.

Kenosha police gave the man a ticket for a red light violation.

The next day, the judge in the Rittenhouse trial banned MSNBC from the courtroom.