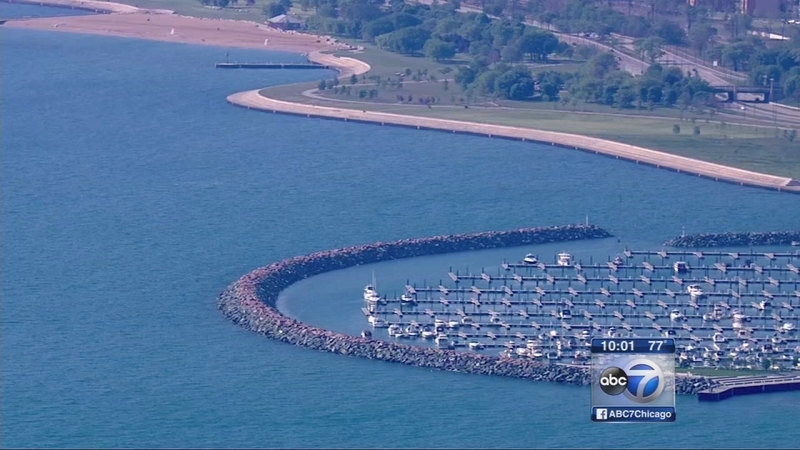 CHICAGO (WLS) -- One woman is dead, a man is in critical condition and two people are still missing after a boating accident on Lake Michigan. The boat capsized Saturday night, but was not reported missing for some time.

An intense search by fire and police boats started Sunday morning around 6 a.m. after the man was rescued by the the captain of a fishing boat.

"We spotted something orange thought it was a kayak. We slowed up the boat, we looked around and we actually saw someone's head. . . He yelled for help, we threw a life ring to him and we brought him into the boat," said Joel Reiser. Reiser threw the man a life preserver, pulled him into the fishing boat and called for help.

That man had been in the 60-degree water for nearly 12 hours. He remains hospitalized in critical condition.

The second person, a woman, was pulled from the water about two hours later. She was pronoounced dead at the hospital.

"Apparently the boat caught on fire, it was heavily involved in smoke, it was taking on water and the boat was sinking and they also said the VHF didn't work," said Reiser.

"Boats that size typically have marine radios, but if they had some sort of power failure, catastrophic event on the boat, they could maybe not be able to make a distress call," said Coast Guard Officer Mark Stevenson.

The boat was headed from New Buffalo Michigan to Burnham Harbor near the Museum Campus when it got into trouble seven miles east of the 31st Street Beach on Saturday night.

On Sunday, rescue crews continued to search for the two people still missing. The boat has not been found but debris has.

"We've found some life jackets, we found a couple of pieces which appear to be floating debris from the boat," District Deputy Chief Ron Dorniker said.

Aiding in the search is a C-130 Coast Guard aircraft. The search area spans 10 miles off the shore line from south of 31st Street to Wilmette.

Authorities were told the others still missing were also wearing life preservers.

"We're fighting time so we're doing the best we can. We have a lot of assets in the area searching actively. We're very aggressive with the to try and find these people," said Dorniker.

Search crews will be back out searching again Monday morning.