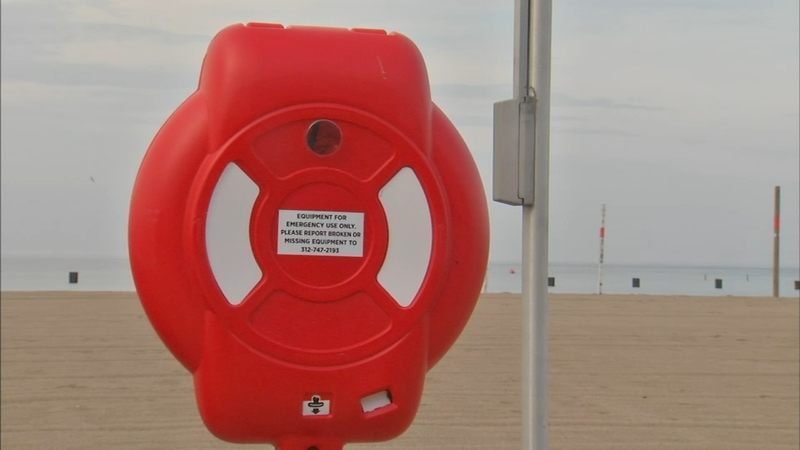 CHICAGO (WLS) -- Of the Great Lakes, experts say Lake Michigan has the highest rate of drownings. But just days after Governor JB Pritzker signed a new law mandating lifesaving rings be installed on all piers and drop-off points along Lake Michigan, a life was saved at North Avenue Beach.

"A person on the lakefront saw someone struggling in the water. They stayed dry. They grabbed a life ring," said Dave Benhamin, co-founder and executive director of Great Lakes Surf Rescue Project. "They threw it in. They helped pull the person out. They saved a life. they put the life ring back. And then everyone went on with their day."

By the time first responders arrived, everyone was safely out of the water, exactly as the Lake Michigan Rescue Equipment Act envisioned.

The bill was proposed after the death of 19-year-old Miguel Cisneros in August 2021. The Columbia student drown in Rogers Park with no life ring nearby. In their anguish, his family campaigned for the act.

"Just knowing that Miguel is working his magic, and it's paying off - it's saving lives, which is what we wanted since the beginning, just to protect the citizens and for no other family to go through what I'm going through," said his mother Maria Diaz.

The act also lays out new guidelines for reporting drowning events and establishing water safety guidelines. Plus it requires warnings to be posted in high incident areas.

"He was set to be a sophomore at Columbia, but his final goal was to come back, study law, and he always said help his south side community. And in a bigger way, not physically, because he's no longer here physically, he's helping the entire city by making the lakefront safer," Diaz said.

The Chicago Fire Department said the man saved at North Avenue Beach this morning is OK, and refused treatment.