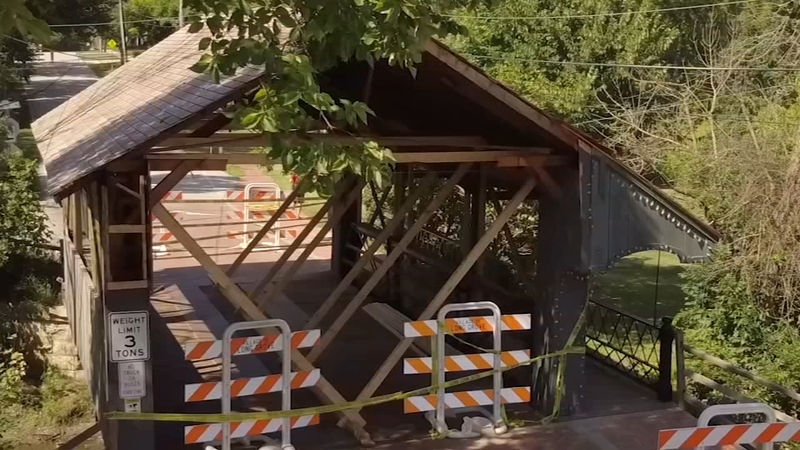 LONG GROVE, Ill. (WLS) -- After receiving a top national honor for its historic covered bridge, Long Grove residents are facing a major setback.They are now working to rebuild after a truck destroyed a piece of their history.

When you think of Long Grove, you're almost obligated to think of its historic covered bridge.

"It's a monument for us. You can't see it in every other town around us," said Ryan Messner, co-chair of the Long Grove Downtown Business Association.

That 112-year-old covered bridge with Pratt pony trusses is now in shambles.

"All of a sudden we hear a loud crack and bang," Messner said. "Big truck ran through and it was just shock and awe because we had just spent so much time to get it deemed historic."

For the past year and a half, Ryan Messner and Aaron and Angie Underwood put their hearts and souls into making the bridge a National Historic Landmark, and they succeeded!

There was even an official plaque affixed to the bridge recognizing the historic nature of this bridge in Long Grove. But in just days, supporters went from elation to despair. Soon after the bridge received the historic recognition, a truck plowed through the bridge leaving caution tape, a road closed, and the bridge in major need of repair.

"It's just like a punch to the gut," said Long Grove Historical Society President Angie Underwood.

She says the bridge is Long Grove to a lot of people.

"It's so unique there aren't any other covered bridges in the Chicago area, so for Long Grove to have one, it's obviously something that's tied to our identity," Underwood said.

That bridge is so meaningful, it's even part of some businesses.

"It's central to us, that's why we have a mural of the actual bridge in our shop," said Covered Bridge Creamery partner Eric Wallor.

And that's why folks we talked to in town want it restored.

"It's a part of so many people's families, their history, photos, it's really a unique part of Long Grove," MaryAnn Ullrich said. She and her husband own the Long Grove Village Tavern.

"It still is a topic of conversation. Because it has such an impact on everyone's lives," Ullrich said.

The village and insurance companies are working now to determine next steps for repairs, but supporters hope the bridge will be back up and running by the middle of next year.