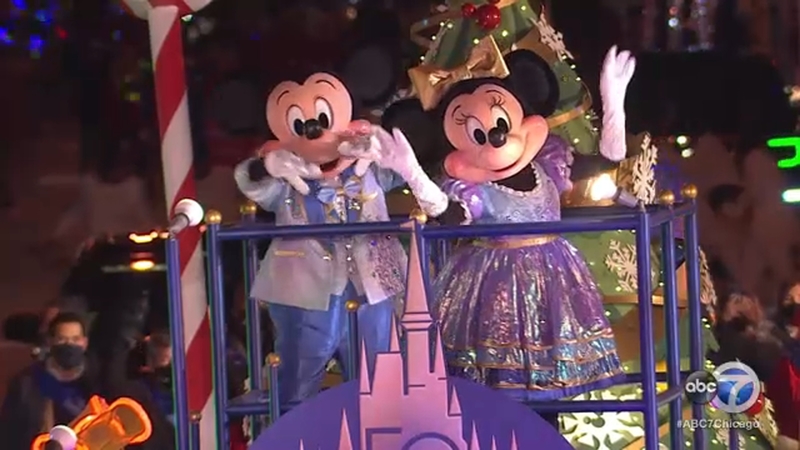 CHICAGO (WLS) -- The magic of the holidays, Chicago style, is captured once again for viewers around the country with musical performances, beloved Walt Disney World characters, and dazzling fireworks, as more than a million twinkling Michigan Avenue lights set the stage for the holiday season and the broadcast of the spectacular 30th annual BMO Harris Bank "Magnificent Mile Lights Festival."

In addition to celebrating the parade's historic anniversary, Mickey Mouse and Minnie Mouse mark the 50th Anniversary of Walt Disney World with their appearance.
The hour-long special will open with a performance by Caroline Innerbichler singing "For the First Time in Forever" from the Broadway in Chicago production of Disney's "Frozen." The entertainment will continue with Kool & the Gang singing their timeless hit "Celebration," hip-hop duo Tag Team performing their always fun "Whomp There it Is," actress/singer Deborah Cox singing "Gimme Gimme Gimme Some Christmas," and American Idol star and hometown darling, Grace Kinstler performing "Rockin' Around the Christmas Tree." Other Christmas favorites include "Love, Victor" star Bebe Wood, who recently released her debut EP "21st Century Hippie," crooning "Santa Baby" and "American Idol"'s Willie Spence performing his rendition of "This Christmas."

In the first official parade of the holidays, Grand Marshals Mickey Mouse and Minnie Mouse, stepping out in their new 50th-anniversary attire, will illuminate over one million lights on 200 trees along "The Magnificent Mile," one of the grandest avenues in the world. Appearing on an awe-inspiring float, the world's most famous couple will lead the way for marching bands from around the country, along with breathtaking floats and helium-filled balloons.

New to this year's parade route is the balloon debut of Bumble, the Abominable Snowman (from the 1964 TV special "Rudolph the Red-Nosed Reindeer"), sponsored by Special Olympic Illinois, plus The Pack - the official Chicago Sky drumline. Chicago's WNBA champion team, The Sky, will be front and center on a float sporting their championship trophy. Chicago's Teatro Zin Zanni will be featured.

Members of the ABC 7 Eyewitness News team - featuring Ravi Baichwal, Larry Mowry, Dionne Miller and Cheryl Scott - will be spreading good cheer as they ride atop ABC 7 Chicago's whimsical float during the parade.
New floats designed by Chicago public school students from UPLIFT Community High School and Curie Metropolitan High School will debut this year. BMO Harris Bank and T-Mobile joined forces with the CPS Department of STEM and the Department of Arts Education to bring a real-world, work-based STEAM design challenge to the students.

During this 15th consecutive year, the much-anticipated tradition will be broadcast to Chicago audiences on ABC 7, the most-watched television station in the city. Throughout the holiday season, the special will also be watched and enjoyed by a national audience via syndication. Broadcast times are available in local listings.