WLS
CHICAGO (WLS) -- The family of murdered Chicago pregnant woman Marlen Ochoa-Lopez is outraged after a state investigation cleared the hospital in the case of her son.

The state said Monday that after an investigation, Advocate Christ Medical Center was found to be in substantial compliance in relation to the Yovanny Lopez case. The decision didn't come with any details beyond that.

Yovanny Lopez was removed from his mother's womb after she was killed. Police and prosecutors said Clarisa Figueroa killed Marlen Ochoa-Lopez back in April, then called 911, claiming she had just had a baby that was not breathing.

WATCH: Attorney for the family of murdered teen mother, Marlen Ochoa-Lopez, addresses media after a state investigation cleared the hospital in the case of her son
EMBED More News Videos

Figueroa was taken to Advocate Christ Medical Center, who did not alert state authorities even though Figueroa did not show signs of giving birth.

The baby, Yovanny, had been in intensive care before dying early Friday morning. His father was at the airport Monday night picking up relatives for the baby's funeral services, which will be private. A family spokesperson expressed outrage over the state's decision.

"Not only is the child the victim of a heinous crime, he's being re-victimized by the state of Illinois," said Julie Contreras, spokesperson for the family.

"We want justice for my son, justice for my wife, and there should be laws that protect people with the police with everyone," said Yovanny Lopez, the baby's father.

Contreras and Frank Avila, the Ochoa-Lopez family's attorney, denounced the findings of the state's investigation of Advocate Christ Medical Center Monday afternoon in front of the Illinois Department of Public Health.

The Ochoa-Lopez family said the hospital made serious errors, when according to the state's investigation, staff failed to call authorities even after a doctor treating the child questioned if Figueroa was really the mother. The administration didn't contact the Chicago Police Department, even after a DNA link to the biological father was confirmed.

"This hospital made very serious errors. They were negligent and now they are re-victimizing this person and intentionally inflicting emotional distress on Yovanny Lopez and I demand justice," Avila said.

Christ Medical Center released a statement thanking the state for the investigation, offering prayers for the Ochoa-Lopez family and saying it's committed to learning from the experience to improve processes at the hospital.

The statement said, "Our hearts and prayers continue to be with the Ochoa-Lopez family, whose courage and grace have drawn the admiration of our entire organization. We thank the Illinois Department of Public Health for its thorough review, and CMS for its assessment, which showed the medical care provided and actions taken by our staff were appropriate. Nevertheless, we are committed to learning from the experience to improve processes. Additionally, we would like to extend our deepest gratitude to our dedicated team for their tireless commitment to delivering world-class, compassionate care."

The family said they want the head of the Illinois Department of Public Health to resign. They said they also want IDPH to conduct a brand new investigation, one they say is not "biased."

Three people have been charged in Marlen Ochoa Lopez's death. Prosecutors said Clarisa Figueroa lured 19-year-old Marlen Ochoa-Lopez to her home with the promise of free baby clothes, then allegedly killed the young woman with the help of her daughter Desiree.

Three weeks after Marlen's disappearance, police said her remains were found in the Southwest Side home where police said she was murdered.

Yovanny's death has been ruled a homicide and more charges could be filed.

The artist who painted a mural of Marlen Ochoa-Lopez in Chicago's Pilsen neighborhood said he plans to add to it in the coming days to include the baby with her. 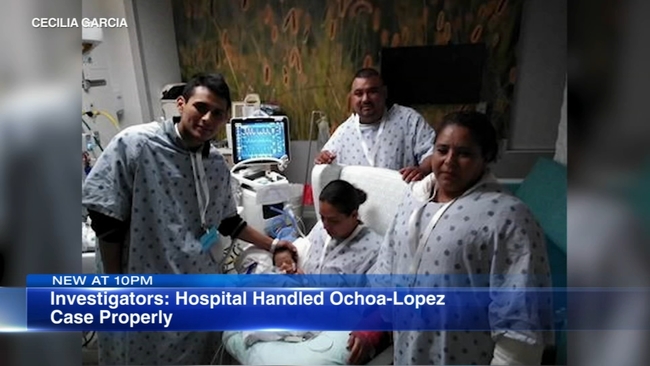