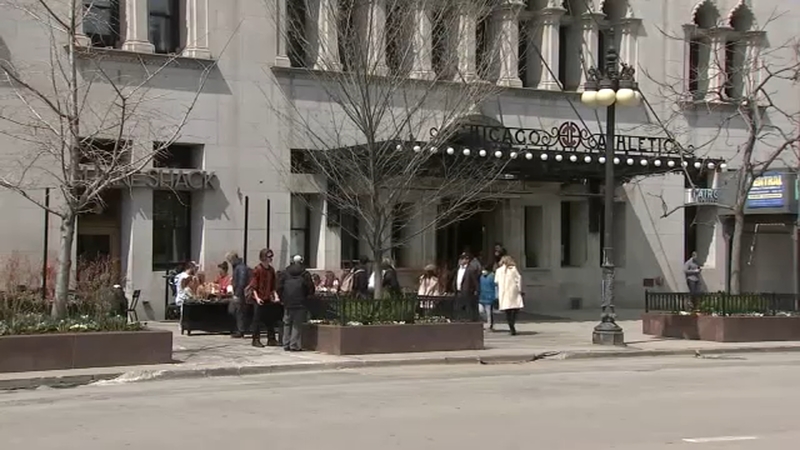 CHICAGO (WLS) -- A member of Mayor Lori Lightfoot's security detail may have prevented a mass shooting after spotting a man with a gun near Millennium Park this week, according to Chicago police.

Police recovered a pair of weapons with laser sights and armor-piercing bullets, and arrested a Wisconsin man.

The man was never near the mayor and so she was never in direct danger, but the sharp eye of a member of her security detail may very well have prevented a terrible tragedy.

The events unfolding Tuesday around 9:00 p.m.

Sources tell ABC7 the mayor's security detail was parked right outside the Shake Shack restaurant at 14 S. Michigan. Mayor Lightfoot had just left a celebration honoring Harold Washington and stopped at a restaurant on the top floor of the Chicago Athletic Association right next door.

Sources said a member of her security detail then noticed something alarming about one of two men standing in line at the Shake Shack.

"...the second has a leather coach-style bag with the outline of a gun," he said to dispatch.

Responding police arrested 21-year-old Treveon Broadway and another man who was not charged, both from Milwaukee.

According to court documents, police recovered two Glock semi-automatic handguns from inside the suspects' vehicle.

Both weapons had an "extended magazine" and "laser sight attachment." One had a "live round in the chamber" and a "switch to shoot full auto."

Broadway is also charged with possessing a "silencer" and "metal piercing bullets," which is considered military-grade weaponry according to one law enforcement expert.

Farrell praised the mayor's bodyguard and given the fact the incident happened right across from Millennium Park, he believes it may have averted something horrible from happening.

"They were obviously up to something that was nefarious or troublesome for the community," Farrell added.

Broadway was released from custody after his aunt posted $1,500 for his bond.

She told ABC7 that she took him to her home in Hammond, Indiana, where he frequently stays.

We knocked on the door but no one answered.

Broadway's aunt said he is a good kid who likes to play basketball and she said doesn't own guns.

Broadway has no known criminal history and it's unclear why he allegedly had those high-powered weapons.

He is facing two felony weapons charges, as well as citations, for possessing the laser sight, silencer and armor-piercing bullets.