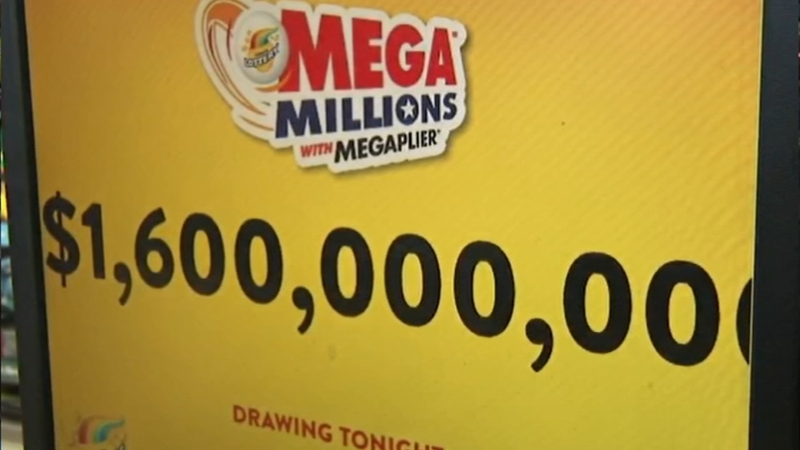 CHICAGO (WLS) -- The Mega Millions lottery jackpot is at a record $1.6 billion. It would be the largest jackpot prize in U.S. history and comes with a cash option of $913 million.

RELATED: Mega Millions jackpot 2018: How much could you buy with $1.6 billion?
EMBED More News Videos

The Mega Millions jackpot has soared to $1.6 billion, the highest lottery drawing in the country's history.

If no one wins, the jackpot for Friday's drawing will be $2 billion, with a cash value of $1.142 billion.

The California Lottery said several tickets in the state matched five out of six numbers, but no ticket was a jackpot.

In the Loop Tuesday, lottery players bought more tickets and fantasized about what they would do with more than a billion dollars.

Mega Millions and Powerball jackpots 2018: Things you need to consider if you win

John Castelli said if he wins, he plans to retire and relax, so he's getting as many tickets as he can.

"I have played in other places and I thought this might be the lucky place," he said.

Linda Camper plans to help her family, her church, her community, then plans to head out of Dodge.

"Move to a tropical island, by myself," she said.

Mega Millions and Powerball 2018: How do the jackpots grow?
EMBED More News Videos

Each jackpot starts at $40 million, but how does it grow to hundreds of millions or more?

If you've noticed jackpots getting larger recently, you're right. Lottery officials changed the odds to lessen the chance of winning a jackpot.

The theory is that bigger jackpots would draw more attention, which would lead to more tickets sold, and a bigger jackpot, and bigger dreams.

"When I was telling my daughter I was buying one, she said we have enough," McLaughlin said. "It was really cute, but I guess I was greedy and bought them anyway."

Think you're going to hit it big tonight? We are crossing our fingers here too! ;-) Not to be a buzzkill, but being a scientific agency we have to point out your chances of being killed by natural disasters are significantly higher. Bottom line is always be prepared! pic.twitter.com/hJJeT9jDs4

So what could you do with that kind of money? You could buy the Willis Tower, worth $1.3 billion, then rename it whatever you would want.

Two tickets for Friday's drawing sold in the Chicago area matched five of the six numbers, making them worth $1 million.

The first winning Quick Pick ticket was sold at a BP gas station in the 6500-block of South Kedzie Avenue, and the other was sold at a Stop N Go Liquor store in the 5200-block of 159th Street, according to a press release from the Illinois Lottery.
Each retailer will receive $10,000, or 1 percent of the prize amount, for selling a winning ticket.

The previous record jackpot in Mega Millions was a $656 million prize that was shared by winners from Kansas, Illinois and Maryland in March 2012.

The Powerball jackpot has also climbed. It's up to an estimated $620 million for Wednesday's drawing. That would make it the fifth-largest jackpot in U.S. history.

The largest Powerball jackpot ever was $1.6 billion in January, 2016, with winners from California, Florida and Tennessee.
Mega Millions jackpots start out at $40 million and roll over if there is no jackpot winner and the overall odds of winning the jackpot are 1:302,575,350. Mega Millions drawings take place at 10 p.m. every Tuesday and Friday.

Powerball jackpots start at $40 million and overall odds of winning the jackpot are 1:292,201,338. Powerball drawings take place at 9:59 p.m. every Wednesday and Saturday.