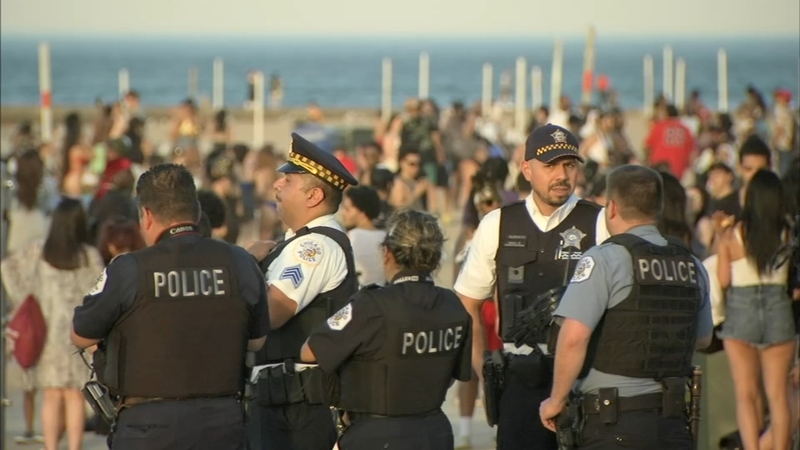 CHICAGO (WLS) -- There were multiple arrests at North Avenue Beach Monday as many flocked to the lakefront to celebrate Memorial Day.

CPD would not confirm the exact number of arrests, but said the arrests were in related to a number of isolated incidents between beachgoers. By the end of the day, a large police presence was apparent at many of the city's beaches.

Video shows one person put into handcuffs at North Avenue Beach. Police said multiple arrests were made there Monday.

"We kind of saw like a ton of police officers and you're kind of like what's going on?" said beachgoer Jennifer Gonzales.

Gonzales and her partner said they saw a large police presence on their way to Castaways Bar and Grill at North Avenue Beach.

"We were just coming down and we just saw the police up here, arresting a kid and they had a pistol with them," said Lazrrick Mosley.

"I was pretty shocked," Gonzales said. "You wouldn't expect someone coming in with a gun and being able to get past the police that were checking our bags."

A Castaways employee, enjoying his birthday off, said he'd never heard of an incident like this before.

"I'm hoping nothing like that happens in the future, but I am glad they got it figured out," Rhavy Booker said.

Gonzales and Mosley said Castaways was shut down after they witnessed the arrest.

"Thankfully he was you know, like arrested," Gonzales said, "but it's scary to think of what could have happened if they didn't catch him."

Authorities said it will take time to gather the complete numbers of the arrests made Monday and throughout the Memorial Day weekend, and have yet to confirm witness reports.

Chicago weather, hot and sunny, had crowds flocking to the city's beaches to swim, grill and exercise on Memorial Day 2022.

Hundreds marked the start of summer in Chicago with a splash.

"It only takes two seconds to get warm. Once you dive in the water, you come out and you'll be more warm," said Humberto Guardado, beachgoer.
All over the city, Chicagoans flocked to the lakefront for a good time in the sun.

"Just having fun at the beach. I would say tossing football with some of the friend. That's awesome. Just kind of having fun," said Chris Walus, beachgoer.

Temperatures soared into the mid-80s on Memorial Day, a perfect day for swimming, grilling and outdoor exercise.

"We're just built for this weather. We're just out here. We don't try to avoid the heat. We stay in it," said beachgoer Joseph Owens.
"Got some chicken, right now, on the grill. Got some wings and a couple of beef hotdogs. We got everything," said Leo Debruce, who was grilling out. "Memorial Day is really special for me and my family. We celebrate our lost loved ones and all of the victims and everybody in the city."

"It's terrific! And, I think at the end of COVID, I think everybody is even more enjoying every minute that they can to be outside," said bicyclist Steven Dufour.

Chicago is still struggling with a lifeguard shortage. While they've prioritized filling lifeguard chairs at beaches, the city is still hiring lifeguards for public pools and offering monetary incentives for anyone interested in the job.

"We still need lifeguards to be able to open our pool system and we're looking forward to this month being productive with hiring," said Chicago Park District CEO Rosa Escareno.