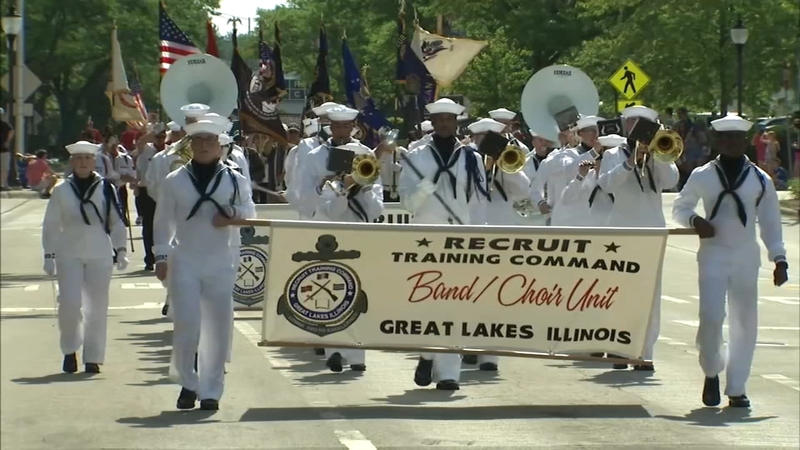 CHICAGO (WLS) -- People across the Chicago area are remembering those who paid the ultimate price this Memorial Day.

In Grant Park, officials asked people gathered to take a moment to remember what Memorial Day is all about.

They said it's about remembering those who have died while serving the country. Mayor Lori Lightfoot reminded people that does not just include U.S. military members, but also police officers and city workers of all kinds.

"Memorial Day is a day to remember all the service men and women who gave their lives for our country's freedom. We're standing here today because of those people," said retired Major General John Scully, civilian aide to the Secretary of the Army in Illinois.

"This weekend, whether its police, whether its fire, EMT, a whole range of city workers are out and have been out away from their families," Lightfoot said.

General John Logan was instrumental to the establishment of Memorial Day after the Civil War. For 26 years now, military members and Chicago city officials have laid wreaths in remembrance of fallen veterans at the base of his statue in Grant Park.

Governor JB Pritzker reminded the crowd what our fallen have given, so we could live free.

"Freedom isn't free," Pritzker said. "Those who gave the ultimate sacrifice knew that. Those of us who remain must remember that."

﻿Arlington Heights is hosting a Memorial Day 2022 parade and its 103rd annual tribute to fallen heroes.

"We actually just moved to Arlington Heights in November, so we're excited to start all these traditions," resident Kylie Arndt said.

"I wanted to come for the kids and for the police officers and everybody that served our country," resident Julie Lima said.

With 3,000 marchers and several thousand spectators, the Arlington Heights Memorial Day parade is one of the largest in the area, running from Village Hall to Memorial Park. The excitement brought out even the littlest of fans.

SEE ALSO | 'It's tough out there': Your Memorial Day BBQ will cost a lot more this year

The village also had a Silver Star Pinning Ceremony followed by a reading of the names of fallen heroes. Parking is free in Arlington Heights parking lots on Memorial Day 2022. For more information, click here.

People across our area came together to commemorate all the local service men and women who made the ultimate sacrifice, defending our freedom.

"I want them to really appreciate what we have in this country and the price that so many people have paid, whether in the military or otherwise serving our country," Vietnam War veteran Don Luken said. "I think it's so easy to take it for granted because we have it so good."

In Mount Prospect, people also gathered for a ceremony that included Revolutionary War and Civil War cannons, a flyover with an Air Force fighter squadron, and a 21-gun salute. They are all traditions that keep people coming back year after year.

"My family moved here in 1950, so I kind of grew up with the town," Mike Zadel said. "This has been a tradition for as long as I can remember."

This year's parade marshal is local hero and Medal of Honor recipient Allen Lynch, who also served as the event's keynote speaker.

Lightfoot encouraged residents to thank city workers for their service.