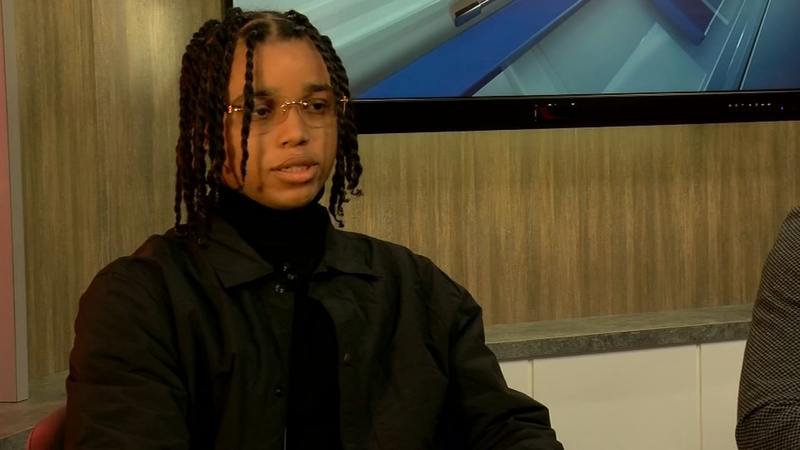 BROOKHAVEN, Miss. -- Two white men are facing criminal charges after a Black delivery driver said he was chased and shot at while delivering packages.

The driver, 24-year-old D'Monterrio Gibson, says it happened on January 24 in Brookhaven, Mississippi.

He was driving a Hertz rental van that had no FedEx markings, though Gibson was wearing a FedEx jacket, shirt, and pants.

Gibson said he was driving down a street when a man in the middle of the road pointed a gun at his vehicle and was waving at him to stop.

Gibson said he hid behind his steering wheel and tried to swerve around the man in the street, but that's when he said he heard shots hitting the van.

Gibson believes he was targeted because he is Black.

"After they fired the initial shots, they continued to chase me out of the city again. I say so if you didn't succeed the first time, then I can just only imagine what they was gonna do if they had caught me," Gibson said in an interview with CNN.

FedEx Driver who was shot at says he can only imagine what the shooters were going to do if they caught him.

Luckily, Gibson was not wounded.

Gibson's attorney compared the incident to the fatal shooting of Ahmaud Arbery.

"At some point, there's going to be a message to this nation that young black men don't have to play the devil's advocate. Young black men. Don't have to worry about the fact that by virtue of the color of their skin, the texture of their hair, that they have to always be the ones that could have possibly scared a white person on the heels of the death of Ahmaud Arbery. We could have had the same situation here," said James Bryant, an attorney at Cochran Firm.

Gibson's are also calling for a federal hate crimes probe in the attempted shooting of the driver in Mississippi, saying it's another example of Black Americans facing danger simply for going about their daily activities, the Associated Press report.

One of his attorneys, Carlos Moore, said Thursday that he believes police are not taking the investigation seriously. Two white men are facing charges, but Moore said the state needs to upgrade those charges to attempted murder.

Moore said Gibson had done nothing wrong before two white men tried to stop him, with one of the men holding a gun.

"He was simply Black while working," Moore said during a news conference.

A Justice Department spokesperson confirmed to The Associated Press on Thursday that the department received a request to look into the case and will review the request to determine any next steps.

Gibson said Thursday that he is seeking mental health treatment and is on unpaid leave from his job.

"I have real bad anxiety since the incident," Gibson said.

Jim Masilak, manager of media relations for FedEx, said in response to questions from AP Thursday: "FedEx takes situations of this nature very seriously, and we are shocked by this criminal act against our team member. ... The safety of our team members is our top priority, and we remain focused on his wellbeing. We will continue to support Mr. Gibson as we cooperate with investigating authorities."

Nobody was injured but the chase and gunfire have sparked social media complaints of racism in Brookhaven, about 55 miles south of the state capital, Jackson. The local NAACP chairman has called on city's Black police chief to resign, but the chief says he has no intention to do so.

"I'm not going anywhere until God makes that decision," Collins told the Daily Leader. "That's between me and God. Until God calls me I'm not worried about what anybody says."

Moore compares the incident to the killing of Ahmaud Arbery, a 25-year-old Black man who was running empty-handed through a Georgia subdivision in 2020 when three white strangers chased him down and blasted him with a shotgun. The white men, including a father and son, were convicted of murder and sentenced to life. Defense lawyers said they suspected Arbery had committed crimes in their neighborhood, but prosecutors said there was no evidence of that. The three still face a federal hate crime trial.

About 68% of Brookhaven's 12,000 residents are Black. The city is in Lincoln County, where District Attorney Dee Bates said information will be presented to a grand jury for a decision on charges once police complete their investigation of the Gibson incident. Witnesses, including Gibson, will be able to testify.

James A. Bryant II of Los Angeles, another of the attorneys representing Gibson, said Thursday that Gibson experiences pain knowing that people tried to harm him because he is Black.

"That has to be the most frightening experience one could face as a young Black man," Bryant said. "And then not only that - they continued to chase him until they got to the freeway. So what would have happened if they were able to cut him off?