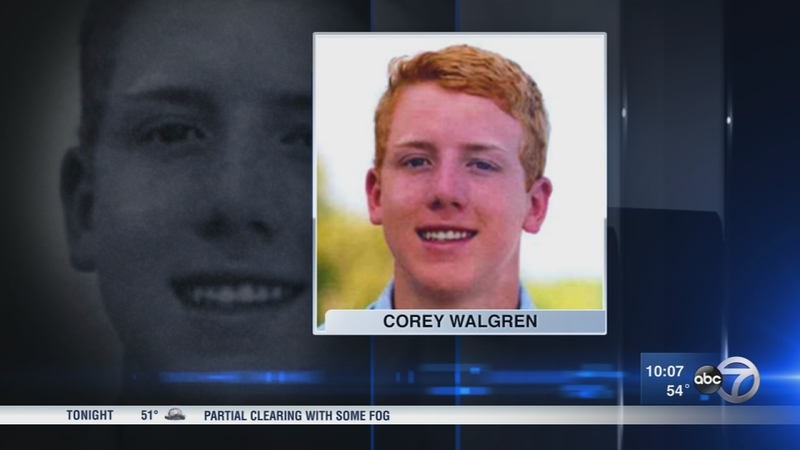 NAPERVILLE, Ill. (WLS) -- A Naperville High School student committed suicide after being called into the dean's office for a disciplinary matter, his family said. The family is now suing the school, alleging he never should have been able to get away from the high school unnoticed and that the events leading up to his death should not have happened either.

"They threatened him and scared him with false information," said the family's attorney, Terry Ekl.

On January 11, Ekl said Corey was called to the dean's office inside Naperville North High School.

"Corey had a consensual sexual relationship with a girl. They began to interrogate him and accuse him of having child pornography on his phone," Ekl said. He said that wasn't the case.

A lawsuit filed in DuPage County Circuit Court alleges that the school and the Naperville Police Department caused Corey Walgren, 16, "extreme, intolerable and excessive emotional and psychological distress" during their disciplinary interrogation of him.

"He had an audio recording on the phone. That's not child pornography. And there's nothing he did that would cause him to be a registered sex offender," he said.

The lawsuit alleges the office interrogation illegally lasted 18 minutes before the school or police called a parent. Then, they said, Corey was left unsupervised.

"Without justification they threatened and scared him to the point where this fine young man thought his life was over and went and killed himself," said Ekl.

By the time his mother arrived, Corey had walked out.

"Police located him after he had fallen or jumped off of a five-story parking garage and killed himself," Ekl said.

Police found the teen's body at the base of a Naperville parking garage.

"I think school districts, they're in a really challenging place. On one hand they want to ensure safety of kids. When something gets put in front of them that they have to be aware of they have to pursue it aggressively," said Adam Russo, clinical social worker.

Both Naperville North and Naperville police are named in the lawsuit Corey's family has filed. Both declined to be interviewed on camera, but released statements.

Napervile 203 School District said in part, "This incident has been very difficult for those involved and we continue to be incredibly saddened by Corey's death. ... We will continue to offer grief counseling to our students, but as this is now a matter of litigation we are not able to comment further."

Naperville City Attorney Mark Disanto released a statement, saying, "This has been a tragic event for everyone involved and our community. Given that this matter involves minors, we ask the community to show patience and respect throughout the legal process. We are confident the school resource officer followed proper policies and procedures. The City and Police Department remain committed to supporting and serving the students and families of our community."