WOODRIDGE, Ill. (WLS) -- Monday marks one year since a devastating tornado tore through the west suburbs.

Dozens of homes were damaged in DuPage County when an EF-3 tornado touched down in Naperville, Darien and Woodridge late at night when many people were sleeping. Eight people were hurt and a pregnant woman lost her baby after that storm.

The Woodridge mayor and the board of trustees proclaimed Monday "Woodridge Strong Day" as a way to recognize volunteers and businesses helping to rebuild as homes in the area are still being repaired. 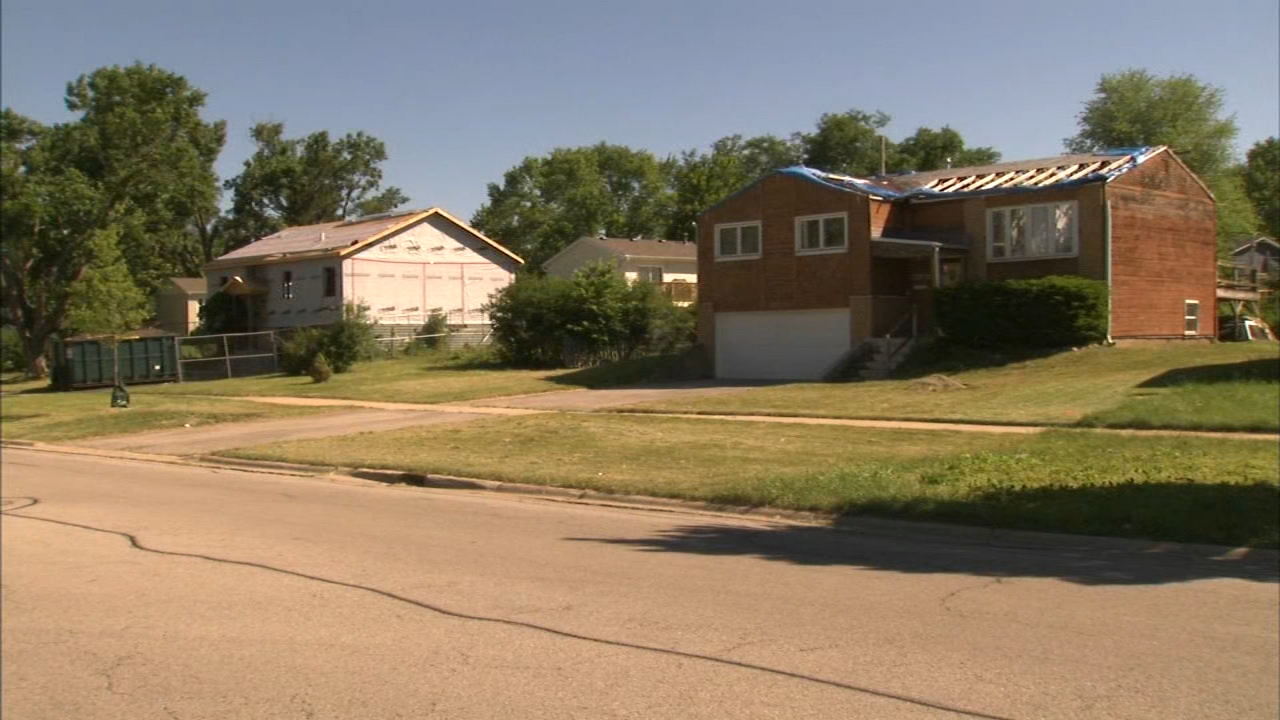 Dozens of homes were damaged in DuPage County when an EF-3 tornado touched down in Naperville, Darien and Woodridge late at night on June 20, 2021.

Adam St. James remembered rushing down to the basement with his family after he heard sirens in the distance.

"The house was just being pelted... and we're all in the basement bathroom with our cats," St. James said. "And it was the loudest wind we ever heard, tunneling between the two houses I guess. We were pretty worried. It was pretty scary."

St. James had to pay for repairs, including the removal of large tree branches, out of his own pocket, but did manage to get help from the village and other organizations.

A moment of silence was held at 11:10 a.m. to honor the residents here, and recognize efforts and generosity of volunteers that helped after the tornado hit.

John Szopa poured a sample of the lager he is making for his Skeleton Key brewery. He said it tastes incredibly satisfying, partly because a year after a tornado destroyed much of the building, not to mention the challenges of the pandemic, they are finally back in business.

"It was devastating for us," Szopa said. "A lot of our memories were destroyed."

The head brewmaster said the challenges nearly forced them to out of business, but he said many Woodridge residents have faced even greater challenges.

One year later, crews are still working on many homes in the hardest hit areas, forcing residents to find other places to live.

It's been an incredibly stressful time. Woodridge resident Derek Rockwell and his family spent several months in a hotel while crews worked to rebuild their home after the tornado virtually destroyed it.

"About three minutes before the tornado hit, we got to the basement and we heard the trees falling on us," he said.

Woodridge village officials say the storm damaged more than 500 homes in the community and leveled 31 of them. But if anything positive has come from it, neighbors say it's the way people in the community have come together to support each other.

"Everybody pitched in and money's coming in," Woodridge resident Dave Marshall said. "People are coming back, getting their houses."

While Woodridge was among the hardest hit communities from tornados last June, other communities, including the southeast corner of Naperville, also sustained serious damage. And many are still recovering after delays getting insurance payments and then the pandemic.