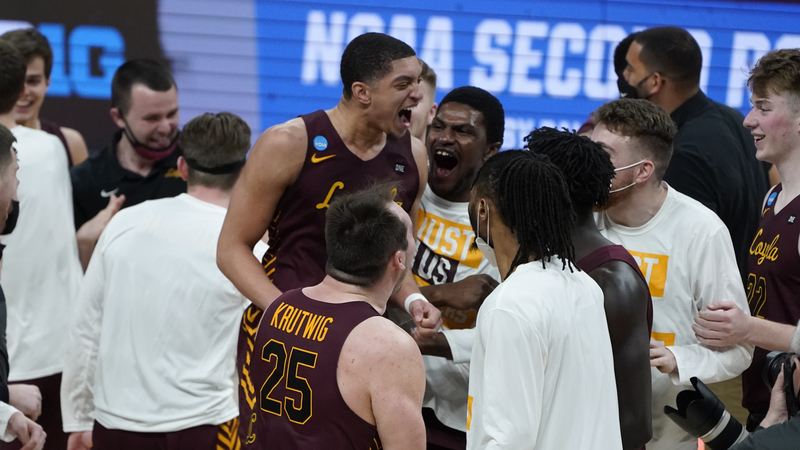 Loyola Chicago upsets U of I, heads to Sweet 16

CHICAGO (WLS) -- The University of Illinois and Loyola Chicago faced off in the NCAA men's basketball tournament Sunday.

The Ramblers defeated the Fighting Illini 71-58 in the second round of the tournament and became the first team to move on to the Sweet 16.

It might be safe to say that for about two hours Sunday, a pretty high percentage of televisions between Champaign and Roger Park were tuned into the game -- and for good reason.

Bars and restaurants may be restricted to 50% capacity these days, but that hardly took away from the excitement during Sunday's matchup between the Fighting Illini and the Loyola Ramblers. The last time two Illinois basketball teams met in the men's NCAA tournament was 1984, but the last time these two teams faced off in the tournament was in 1963.

"It is super exciting to see two Illinois teams playing. I don't think it's happened in a long time," said Illini fan Brent Brock. "To see, the city of Chicago -- everyone kind of meshing together, COVID's kind of clearing up a little bit. To see the atmosphere. It's good to be back with the atmosphere for sure."

"It's so exciting to be an alumnus," added Ramblers fan Lauren Goodell. "We saw this the first time when they went to the Final Four and just to have this energy again is so amazing."

It was hardly fair, coming so early into March Madness. The meeting between the number one and number eight seed could rightly be considered one of the biggest games in Illinois college basketball history.

"I think everyone around would have liked to have this happen a little later but, you know. It stinks that someone is going home today," said Illini fan Nicholas Serpico.

And of course, there was inevitably a lot of good-natured ribbing going on as friends and families split along team colors.

"My dad went to Loyola. My brother goes to U of I. I go to Loyola currently. So yes, big rivalry here," said Loyola fan Mia Davito.

"For the two of us, it's a once-in-a-lifetime game. March madness. It's crazy, it's been a lot of fun," added Max Davito, who is an Illinois fan.

A fully-vaccinated Sister Jean is in Indianapolis this week to cheer on her Loyola Ramblers in the NCAA tournament.

One look at the demeanor of fans leaving the field house and it was not difficult to figure who won the battle of Illinois.

Loyola fans are ready to party like it's 2018 -- their dream season when they went to the Final Four.

"I have full faith. They played great. Let's keep going," said Kathy Valentine, whose son is one of Loyola's assistant coaches.

Many Illinois fans, however, are deeply disappointed to see their team, with a number one seed and hopes of a national championship, exit in the second round of the tournament.

"It's gonna be a long ride back to Champaign. Very long ride," said Illinois student Anthony Allen. "Illinois had a very exciting season, but you have to give credit to Loyola."

With precious few tickets available for either team in the field house to see the game in-person, some fans came to Indianapolis hoping for the best, but many settling for a seat at the bar down the block in front of a television.

You won't be able to miss the NCAA bracket picks here: This Indianapolis hotel shows off for March Madness.

"We just missed tickets. They were out of our price range, but we're hoping going forward we can snag some," said Merritt Peterson, a Loyola alum.

On the court, they were appreciating the efforts of senior center Cameron Krutwig from Northwest Suburban Jacobs high school. He had a huge game in front of his high school coach, who was in the crowd.

"He's unbelievable, and what they've been able to do. Don't put anything past them," said Jacobs high school coach Jimmy Roberts.

Illinois, the Big Ten tournament champion, was the first seed in the Midwest. The team defeated Drexel 78-49 in the first round.

Eight-seed Loyola took down Georgia Tech 71-60 in the first round of the tournament.

"I think it's great for Illinois basketball. I mean you got two ranked teams going at it. It's been a basketball-passionate state. I know the city of Chicago is, and I know Champaign is, and to see that, going for a ticket for the Sweet 16. I know there'll be a lot of eyes in basketball at the forefront, not only in the state but in the country," said Porter Moser, Loyola head coach.

"It's very easy to get wrapped up in the storylines. I don't I have to look it at from a basketball perspective of, you know, next game. It's great for our state. I think it speaks volumes for their program and the job Porter's done. It can't be anything but great for the state," said Brad Underwood, Illinois head coach.

"I watched Loyola's run, you know when they made it to the Final Four and the year before that. I always, you know, root for Chicago teams. No matter whoever is in the tournament, you know, if it's anyone close to home, I always root for them," said Ayo Dosunmu.