WLS
By Diane Pathieu and Will Jones
AURORA, Ill. (WLS) -- Eight juveniles have been charged a day after a massive fight at a shopping center in Aurora, Ill., police said.

The disturbance at Fox Valley Mall on Monday came as there were similar problems at malls nationwide.

Aurora police said Tuesday that eight juveniles have been charged with misdemeanors and have not ruled out future felony charges. Police said that more arrests are also possible.

Cell phone cameras captured the commotion around 7 p.m. at the center of the mall. Terrified shoppers scrambled for the exits as the fight grew and 75 officers were called to break up the fight.

"The indications are bottles of pop, cups of pop were being thrown, and other unknown objects," said Cmdr. Mike Doerzaph, Aurora police.

Workers said the fight started in the middle of the food court, and stretched to the first floor of the mall. Police said more than 1,000 people were in the vicinity of the fight, which prompted them to evacuate and close the mall for the safety of patrons.

"The motivation behind yesterday's incident at Fox Valley Mall is under investigation and is unknown at this time," Doerzaph said.

Police said a police sergeant and a mall security guard were battered while trying to break up the fight. No one was hurt in Monday's brawl in Aurora, Ill.

The Fox Valley Mall reopened 10 a.m. Tuesday. Food court employees said they were not instructed to do anything differently, but there was some damage to some of the property that they had to clean up.

An event celebrating Hanukkah carried on as planned.

"The way we fight back darkness is with the light. The event must go on. We have to continue with the celebration, especially since the message of Hanukkah is about teaching people to be decent to one another and violence is not the answer," said Rabbi Mendy Goldstein, Chabad Jewish Center of Naperville.

In a statement, the Fox Valley Mall general manager J. Scott Samson said they are fully cooperating with local authorities.

"The safety and security of our guests, employees, and tenants at Fox Valley Mall is always our top priority. We are thankful to APD for taking swift and immediate measures after the disturbance last night. While we are not able to speak about specific security measures, please know that we work close with local and national law enforcement on all matters relating to mall safety. Our holiday events and hours will continue as scheduled," Samson said.

Joyce Williams and her daughters didn't let what happened Monday postpone their shopping this afternoon.

"My dad almost didn't let her out of the house to come over because he was worried about us," said Sandy Melgosa.

"But I said there will be a lot of security after that kind of incident," Joyce Williams said.

Fox Valley wasn't the only target, police have been called to fights at several malls across the country including in Indianapolis where over 100 teenagers began to fight in a mall and someone reported hearing shots fired.

Seven underage teens were arrested and police said one male and six females were involved in the fight in Indianapolis. Police believe the fights were arranged on social media and then carried out.
Huge fights also broke out nationwide from Colorado to Tennessee, Texas to New Jersey.

"Five arrests have been made. All the arrest were juveniles. We also had two people that were injured," said Chris Amsler of the Aurora Police Department in Colorado. 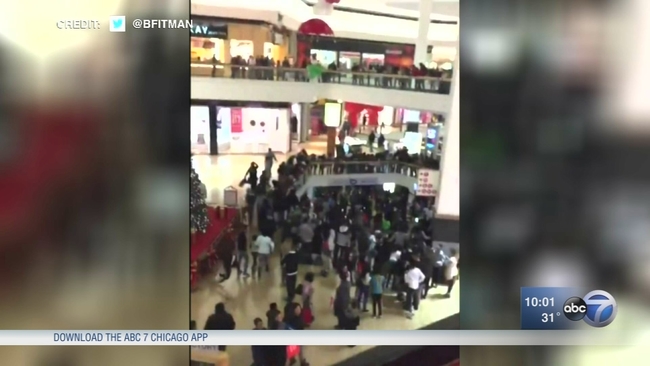