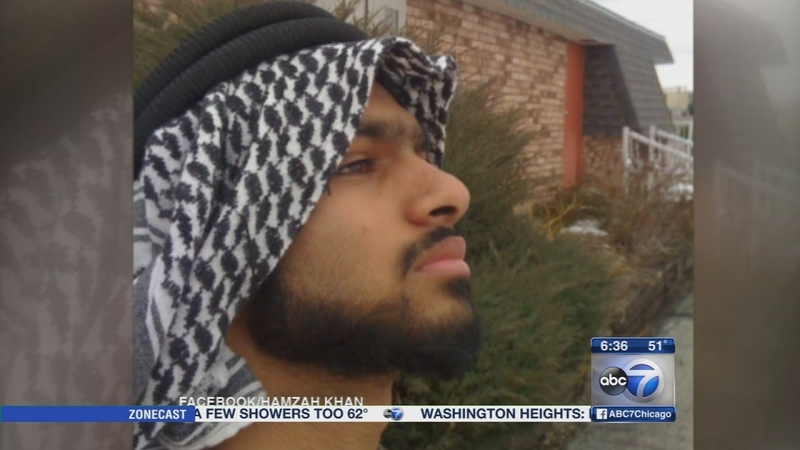 Prosecutors said he attempted to board a flight to Turkey with a $4,000 round-trip ticket purchased for him, with the intent of crossing into neighboring Syria or Iraq to join ISIS. He was arrested at O'Hare Airport on Saturday.

The FBI said Khan acknowledged making contact with someone online who arranged for him to meet ISIS representatives once he landed.

Federal agents found a three-page letter from Khan to his parents in the home he shares with his family. Khan expressed frustration that his tax dollars will be used to kill his Muslim brothers and sisters. He invited his family members to join him in the Islamic State and urges them not to contact the authorities.

Members of the mosque Khan and his family attend in Bolingbrook are shocked by the news.

"Islam is about peace. It condemns ISIS. A lot of people have spoken about this. A lot of scholars have spoken against ISIS and how it doesn't have anything to do with Islam. It's giving a bad name to Islam," Bahauddin Ali Khan said.

Khan's Boilingbrook neighbors said they are stunned by the revelations.

Khan was described as a quiet, cordial man who taught Arabic and the Koran at the mosque. But prosecutors said a notebook seized by the FBI contained a drawing of what appeared to be an armed fighter with an ISIL flag behind them.

Above and below the drawings were the words in Arabic, "Come to jihad."

Khan told a judge on Monday he understood the charges against him and smiled at his father and weeping mother as he left the courthouse.

Khan will be back in court for a detention hearing on Thursday.