WLS
CHICAGO (WLS) -- Chicago filmmaker David Steiner was killed in a crash in Uganda, where he had traveled with students from Barbara A. Sizemore Academy in Englewood after working with them on a documentary about their school.

Steiner was traveling with his son, several students from the Englewood school and a film crew in Uganda to collect more international awards for their documentary. The group was together in a bus when they were hit head on and sent into a ditch.

Two eighth grade students and two other adults suffered non-life threatening injuries; Steiner was the only one killed.

"I saw some posts from Uganda that instantly turned my blood cold," said Paul Christopher Greene, a filmmaker and friend of Steiner.

Steiner died on impact. Video of the aftermath of the crash was posted on YouTube.

The group was in Uganda for the Nile Diaspora International Film Festival to screen their documentary. School officials said they were working with the U.S. Consulate and elected officials to get the students and adults back to Chicago as quickly as possible.

Steiner worked with Terrance Dantzler and Hayah Rasul on "Saving Barbara Sizemore," an award-winning indie documentary about the successful quest by students to keep Barbara Sizemore Academy open after Chicago Public Schools voted to close it in 2015.

The group left for the trip last week. They had hoped to open even more eyes overseas and were set to work on another documentary on Sudanese refugee children.

"They were also going to be engaged in a second documentary where he was having them meet with Sudanese refugee children," said Dr. Carol Lee, co-founder of Betty Shabazz International Charter Schools.

"David was incredibly passionate about this project. It was his life," Greene said.

"I like so much to work with people that want to help other people," said Rachman Nachman, Steiner's friend.

On Christmas, the filmmaker used his iconic silver hair to dress up as Santa to bring some holiday cheer to their traveling group.

"I last spoke to him on Saturday night and he was really happy," Nachman said.

Steiner's fiancée Diane Silverberg opted stayed behind for the trip. She released a statement, saying, "David died as he lived: Selflessly bringing joy to others, no matter the distance or complexity. In one of his last texts to me, he remarked that the joy they were bringing to the Sudanese refugees and to the children from Englewood who accompanied him had made all the challenges of the trip worthwhile."

Sarah Giroux, a Chicago-based cinematographer on the trip with the group, posted a message on Facebook saying their van was knocked into a sewage ditch during the crash and as the group waited for help their bags were raided, their money was stolen and some of their passports taken. The remaining members of the group are now back at a hotel trying to figure out how to get back to the United States as soon as possible.

Betty Shabazz International Charter Schools, which operates the school, released a statement Monday saying in part, "We are extremely saddened to learn that filmmaker David Steiner, one of our committed school volunteers, died tragically in an automobile accident in Uganda... Our sincerest prayers and condolences are extended to the entire Steiner family, particularly his wife Diane and his father Joe. David was a rare cinematographer who loved our school and sought the goodness in all humanity. We will miss him."
Related topics:
englewoodchicagocar crashexclusivemovieobituaryfilm festivalstudents
Copyright © 2020 WLS-TV. All Rights Reserved.
RELATED 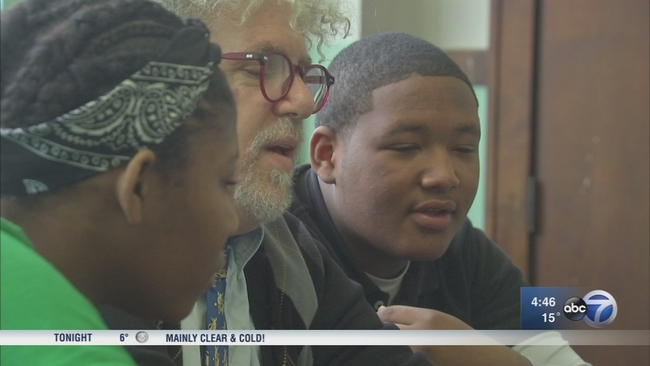