WLS
CHICAGO (WLS) -- Aimee Coath, 51, of south suburban Flossmoor, Ill., was struck and killed by a CTA bus while crossing the street at Michigan and Lake on Tuesday, June 2, 2015.

Coath died after being transported to Northwestern Memorial Hospital.

She was supposed to be meeting her son and ex-husband for dinner Tuesday night and they were waiting for her at the restaurant, her brother said.

"They were calling her phone and [were] very concerned. And when [her ex-husband] got back to his home in Flossmoor, a policeman was there, and that's how the family found out," James Edward Coath said.

Coath grew up in Lake Forest and is one of eight children. She is survived by two grown children, including a daughter who is set to be married in the fall. She worked as a manager at a Gap store. The company released a statement that read, in part, "We are currently focused on the well-being of our employees who worked with Aimee and are affected by this tragic news. Our thoughts are with Aimee's family during this difficult time." 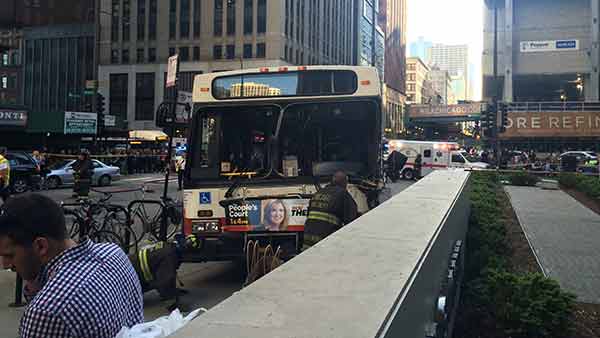 Witnesses said the CTA bus swerved to avoid another car and, in the process, careened into pedestrians, struck other cars and wound up on the south side of the pedestrian plaza in front of 205 N. Michigan Avenue. Coath was crossing the street.
Related topics:
flossmoorloopbus crashcta
Copyright © 2020 WLS-TV. All Rights Reserved.
More Videos
From CNN Newsource affiliates
TOP STORIES