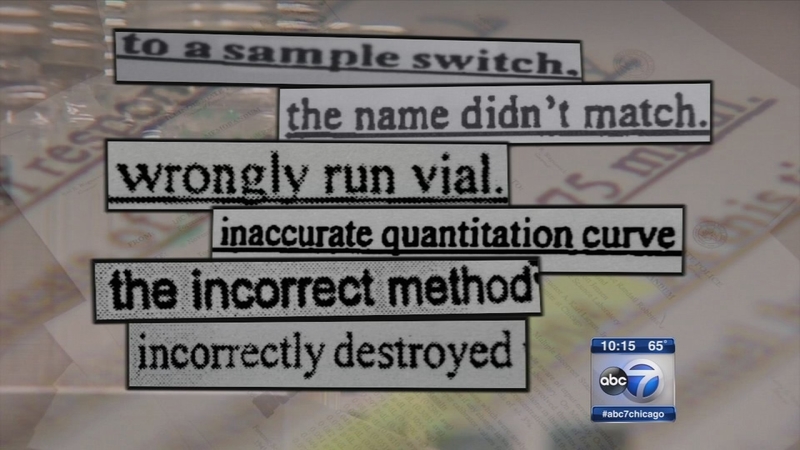 CHICAGO (WLS) -- Some drunk drivers could go free because of law and disorder at Illinois State Police crime labs.

The ABC7 I-Team uncovered a pattern of forensic failures that could put criminal cases in jeopardy and risk thousands of charges and convictions being thrown out.

Unreliability in science is like a bull in a china shop: it can wreck everything. The Illinois state crime lab is under fire by a criminal defendant who may have been wrongly charged- using evidence with inaccurate or unreliable test results - and under fire by defense attorneys and experts alarmed by what they see as shoddy science.

James Kisla struck a pedestrian on Yackly Avenue in Lisle. According to court records, a couple ran across the middle of a street, into traffic, in front of Kisla's car.

"I could not stop fast enough," Kisla said.

Kisla wasn't ticketed in the 2011 accident but a sobriety test had him just beyond the legal limit. Then Kisla's lawyer discovered this - a 2011 internal audit of the Illinois State Police Laboratories and blood alcohol test inaccuracies.

But the audit called for corrective action - a revision of the labs' "scientific method" and ordered "in-service training for the state police toxicology section."

"The prosecutor decided not to even bring the blood test results into evidence. It only took one day after for the judge to declare Mr. Kisla innocent of all the charges," Ramsell said.

Up to 15 years in jail - but Kisla was cleared because the state police forensic tests were unreliable.

"They are supposed to uphold the law and, in my feeling, they are breaking the law," Kisla said.

The I-Team found more lab mistakes occurring in the state's labs. We examined these internal Illinois State Police lab audits and reports going back to 2003 and found numerous blood and urine testing errors. "Test samples (were) switched," there were "mislabeled specimens", a "mix up of results," "improper calibrations" of tests, "improper methods (were) used," and "samples wrongly destroyed."

But Ramsell says the biggest problem is none of the state's lab results for blood and alcohol tests can be considered reliable. That is because their lab technicians have never performed "method validations" on their testing procedures - a fundamental check and balance in the science world.

"Not only is it completely unacceptable but it's shocking that no one from the state police ever reported that to anybody," Ramsell said.

State Police Director Leo Schmitz declined an I-Team request to discuss lab problems uncovered by the I-Team or the lack of method validation studies in state labs. In a written statement, state police say while they don't do method validation studies, they use "a valid method in blood alcohol testing which is widely accepted in the scientific community."

And in these 2005 and 2007 internal state reports, the police labs were told ordered to "fully validate" their methods. State police officials now admit that has not happened.

"Missing that information, they cannot rely on the validity of the results," said Kevin Schug, professor of chemistry and biochemistry at University of Texas at Arlington.

Schug recently wrote an article for an online toxicology magazine about Illinois' lack of "due diligence."

"You simply don't do analytical chemistry without validating your methods and people have known that for many, many years," Schug said. "It certainly could affect justice, it could be false positives, it could be false negatives, there's just a lack of data to verify that the data is reliable."

Although the state police director would not sit for an interview on this, his public relations team defends their lab work as valid and accredited, maintaining they do objective analysis and provide admissible testimony in court.

With evidence to the contrary, the question is: how long will state officials be able to defend their crime labs?

ABC7 Request for Response: An audit, this one from 7/13/11 states that "75% of the whole blood controls analyzed exceeded two standard deviation" giving incorrect results.

Illinois State Police Response: This statement is incorrect; the issue (in quotes) did not affect the accuracy of reported results. The issue merely indicated that an adjustment was needed in the monitoring process; this was addressed.

Illinois State Police Response: ISP forensic scientists issue laboratory reports and are prepared to testify on the analyses performed and results obtained; in any court case, the decision to utilize the laboratory report and/or call the forensic scientist to testify is a litigation decision for the attorneys involved in the prosecution or defense of any given criminal case.

ABC 7 Request: If you have method validations studies for the Illinois State Laboratories for the identity and quantity of ethanol in blood, we would like a copy.

Illinois State Police Response: There appears to be some confusion regarding our previous response; we never said we had a "validation study" in the narrow context that you are requesting.

In 2013, the Scientific Working Group for Forensic Toxicologists (SWGTOX) recommended a standardized guideline for conducting validation studies. Prior to the release of the 2013 SWGTOX guidelines, there were no standardized validation guidelines in the toxicology forensic science community. ISP's method was developed prior to 2013, so "validation studies" under the 2013 SWGTOX guidelines do not exist nor are they necessary for ISP to show its method is valid. The ISP uses a valid method in blood alcohol testing which is widely accepted in the scientific community. This method, or procedure, was developed based on a peer-reviewed scientific article published in 1988. This development/validation approach has always been acceptable to ISP's external accreditation body. Although the ISP's procedure has not changed significantly since its development, the ISP continuously evaluates its procedures and has determined this procedure is still appropriate. It remains valid in the scientific community and has been reviewed by external forensic experts through the accreditation process, as well as through external proficiency testing and through the use of certified positive controls.

ISP strives to evolve with the forensic science community and, like other labs across the country, will implement the SWGTOX guidelines in new method development, as appropriate.