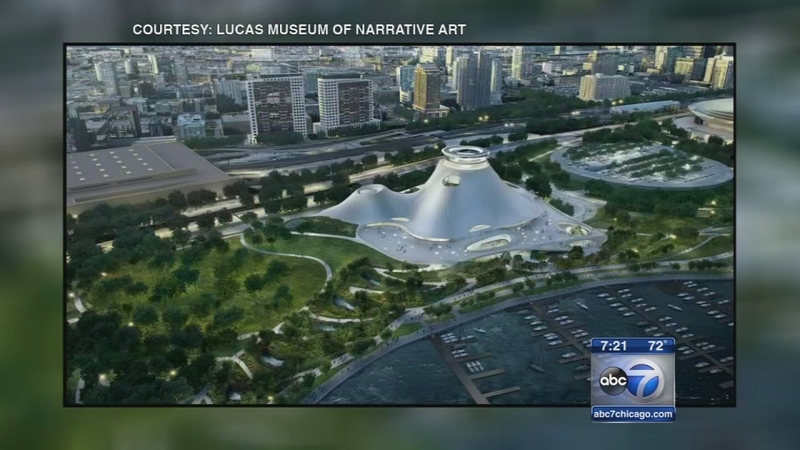 Group upset of location, not design

CHICAGO -- Revised plans for the Lucas Museum include more green space, a smaller building with more windows, and fewer parking spots. However, critics say the issue isn't with the futuristic design- but the use of public land.

"Does it fit in Chicago? I'm not sure," Scott Freberg said.

"I think it might stick out, but I think that it would be a unique, cool touch!" Mary Clare Jordan said.

The 17-acre site creates 4.5 acres of new parkland along the city's lakefront where there is currently an asphalt parking lot by Soldier Field.

The group Friends of the Parks filed a lawsuit in November 2014 because the museum would violate a city ordinance prohibiting further development east of Lake Shore Drive.

"We're hoping to take a parking lot, an asphalt parking lot, and convert it into four and a half new acres of parkland, green space, open space accessible for the public for the enjoyment of all of us in Chicago and those who visit and into a world class museum," said Don Bacigalupi, Lucas Museum President.

The building's design -- a smooth, tapering, dune-like form topped with an observation deck resembling a floating disc, compared to critics as 'Jabba the Hutt'-- is essentially final, although there could be minor adjustments. An outdoor plaza in front gently rolls upward into the sloping face of the building.

"It reminds you of the sand dune landscape that had been there on the lakefront a long time ago," said architect Ma Yansong. "So it's very organic architecture."

The museum will showcase popular art Lucas has collected since college, including illustrations by Norman Rockwell, Maxfield Parrish and N.C. Wyeth as well as works by Lucas's visual effects company, Industrial Light and Magic.

The vision is to highlight art that tells a story. The collection will have "Star Wars" and "Indiana Jones" fans mingling with art connoisseurs, Bacigalupi said.

Representatives from the Lucas Museum and Chicago Park District are scheduled to present the plans to City Council next week.

Construction is expected to begin in March and last until 2018.