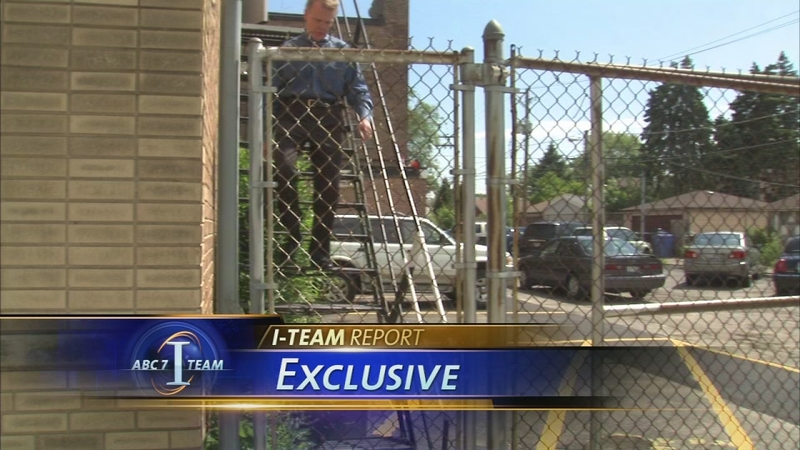 CHICAGO (WLS) -- One person who has been missing this week when Gov. Quinn and other leaders met to discuss the pension problems is House Speaker Mike Madigan.

On Thursday, the ABC7 I-Team tracked down the House Speaker.

The Speaker of the Illinois House can be removed from the milk cartons. Michael Madigan has been found, and not in Wisconsin or La Jolla, California or Palm Springs, as some had speculated.

Speaker Madigan - considered the linchpin of the General Assembly - was found right on the Southwest Side where he lives, despite his best efforts to avoid the ABC7 I-Team.

American flags, bright flowers and perfectly manicured greenery surround the Madigan home on the Southwest Side.

Thursday afternoon, Speaker Madigan and his wife drove up in separate cars- the speaker surfacing for the first time since last weekend when the General Assembly recessed for summer vacation without solving the state's financial crisis.

When he pulled up in front of his house to pick up his wife, ABC7's Chuck Goudie wanted to ask Mr. Madigan about the Illinois pension debacle and other unfinished legislative business. Mr. Madigan declined and left briskly, even leaving his wife behind in the garage.

Madigan apparently not interested in addressing the state's credit rating that at that very moment was being lowered by Moody's.

Governor Quinn knows this feeling. He invited Madigan to a pension brainstorm session on Tuesday but Madigan never showed.

"I left a message with his staff, top assistant. I left a message on his wife's cell phone. I'm going to be talking, hopefully very soon, to Mike Madigan, but he's not the only leader," said Gov. Pat Quinn.

Speaker Madigan retreated a few blocks to his precinct office. When we arrived here, staffers refused to answer the door, even though they could be seen scurrying behind glass and heard on the phone asking for direction.

During the two hours we were in the hallway, constituents showed looking for help and they got the same treatment. No one let them in. A pregnant woman and her son rang the bell for a half hour and the youngster banged on the glass. But they were all ignored by Mr. Madigan and his staff who were inside.

One staffer left with his head covered, another was deployed to the parking lot and could be heard signaling that "the coast is clear."

Speaker of the House Michael Madigan came down the rear stairs to a waiting car that kicked up a little gravel and he left.

Mr. Madigan left his car in the parking lot; he was driven away by a staff member who was actually seen with a cell phone.

Madigan does not carry a cell phone according to his spokesman, but has been known to borrow one.

We asked Mr. Madigan's spokesman where the speaker went on vacation.