Blade, a 6-year-old Dutch shepherd with four years on the Lake County Sheriff's Department's Gang Unit, was injured in January during a traffic stop in the 700-block of 42nd Avenue.

Blade underwent two successful surgeries after being shot in the face, taking a bullet for his partner. He had a checkup and X-rays Tuesday at the Purdue Animal Hospital in West Lafayette to see how his jaw is healing.

Blade was brought in for his four week recheck Tuesday, when specialists assessed the healing of his fractured jaw. Doctors say all his skin incisions have healed very nicely and his hair is already growing back, so he is beginning to look like his "good old self."

X-rays showed the jaw fracture is healing appropriately and there are no signs of any problems with the bone plates that had been implanted to repair his jaw, doctors said.

Blade will be brought in again in four weeks to repeat the X-rays to ensure the healing has continued to progress, doctors said.

Blade is still going through medical procedures and will not officially retire until he is fully healed and evaluated. Blade will visit Canada with his breeders and trainers next month.

During a foot chase, Blade and an officer followed Marquis Thomas down an alley to railroad tracks, where he fired shots at the officer and struck the police dog. The officer returned fire and struck Thomas. Thomas, 18, of Merrillville, died of his wounds, according to Indiana State Police.

The Lake County K9 Association said the dog had surgery to remove bullet fragments from his jaw and neck and another surgery to repair a broken jaw.
Related topics:
garypolice involved shootingk 9
Copyright © 2020 WLS-TV. All Rights Reserved.
RELATED 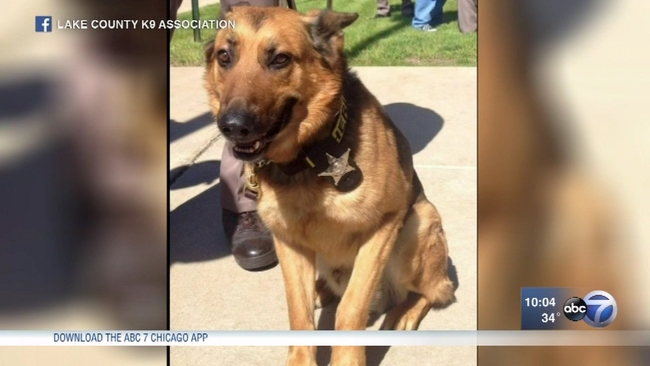