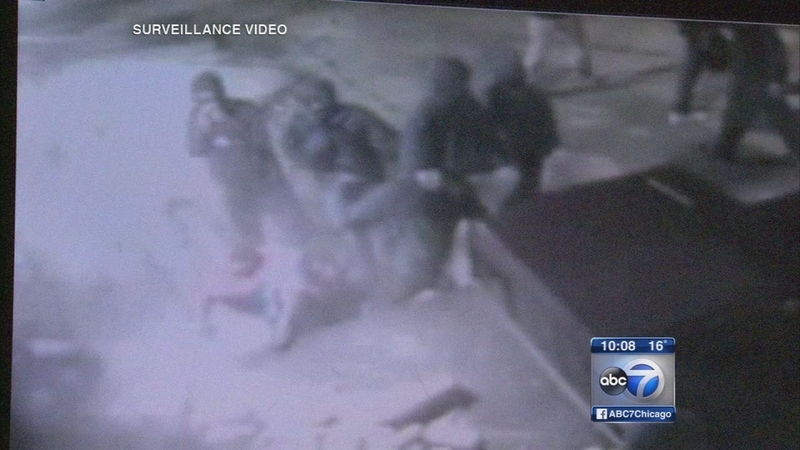 CHICAGO (WLS) -- For the second time in as many days, Chicago Police are investigating a smash-and-grab robbery at a clothing store.

A truck slammed through the back wall of J-Bees Clothing and Footwear in the city's Austin neighborhood, then at least 20 thieves rushed inside, scooping up high-dollar, brand-name clothing.

The store owner estimates that Thursday's smash-and-grab burglary will cost him nearly a $100,000, the price for stolen merchandise and damage to the building.

It only took the burglars in a stolen truck 20 seconds to ram-rod their way into the store. Twenty seconds to ruin Thanksgiving.

"I'm eating this, VeggieMax from Subway," said store manager Muhammad Lodhi. "Not one of my daughters are here, my wife is not here, nothing. They are at home, I'm over here."

Lodhi is keeping watch in his car Thursday night after the gang of burglars targeted the store at 4:20 Thursday morning. Friday, like many retailers, was expected to be a big day.

The thieves escaped with some 80 pairs of expensive Robbins jeans, worth at least $250 a pair, Prada shoes and other items.

"I'm going to lose Black Friday sales, it's one of the biggest days of the year," store owner Syed Hussan said.

In a similar case on Wednesday, thieves used a mini-van to bust into a West Garfield Park store. Back in the Austin neighborhood, they're boarding up. The owner of the stolen truck removes bricks, while thinking of the burglars.

Lodhi says he understands wrong from right - and maybe, on this Thanksgiving, that's what's missing here.

"Probably nobody there to teach them," he said. "So I pray for them, that they go the right way."

Thursday night, Chicago Police say they are not linking the two cases together and they have not made any arrests.

Hussan said he has been in business nearly 20 years and calls this the worst year he has ever had. He owns 19 stores, has experienced seven burglaries, and has closed one store on the far South Side because of the problem.