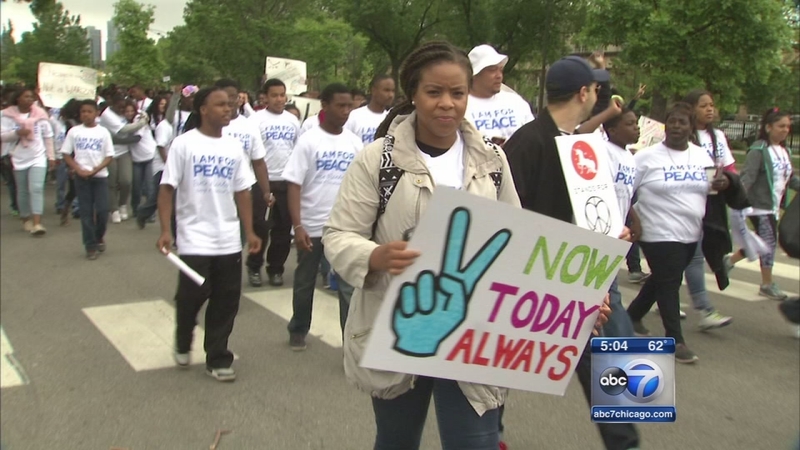 CHICAGO (WLS) -- More than 2,000 Chicago students from middle and high schools marched 13 blocks Friday morning on the Near South Side to speak out against gun violence and stand up for peace.

The march is a big finish for some recent high school graduates.

"One voice can make a difference, what started as started as a comment in a discipline life class led to a movement with thousands of supporters," said Janeya Cunningham, a 2015 Perspectives Charter School graduate.

Perspectives Charter School students rallied for a peace movement they started. They shut down State Street for a time, marching with a message.

"I can't thank the students enough for realizing that and three years ago starting this march because this is your first step towards citizenship," said Mayor Rahm Emanuel.

A few students frustrated with the violence they saw affecting other young people in the city and released a documentary, "I Am for Peace," that got national attention.

There weren't this many people when they had their first march, but they carried on.

Just two days before this school year was to start, a sophomore was shot and killed. Shaquise Buckner, 16, was the unintended target of a drive-by shooting.

"We love our students so much and we're scared with them," said Diana Shulla-Cose, Perspectives Charter Schools president and co-founder.

Luis Cazares, a former Perspectives student who was shot and seriously wounded, now uses a wheelchair.

"I was a victim of a gunshot, and if I could give back to some of these young kids, then I am all for it," Cazares, a 1998 graduate, said.

"So many more people, my favorite part is when we turned the corner on State Street and I got to see how long the line actually was - it was awesome, I'm proud," Cunningham said.

Participants said what's important about the march is that it's teens talking to other teens, and Perspectives administrators and teachers hope that that will make all the difference.