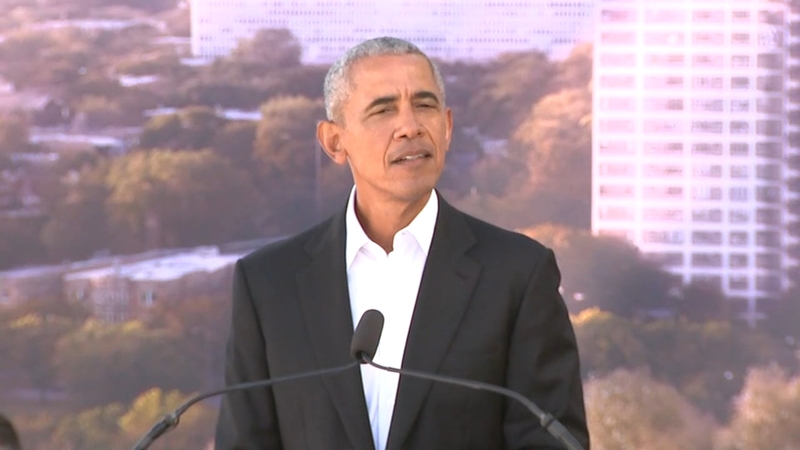 CHICAGO (WLS) -- A South Side plot of land is about to become the site of historical construction.

After years of blueprints and court battles, the first shovels turned in Jackson Park Tuesday to begin physically building the Obama Presidential Center.

The $500 million facility that has been six years in the making is being built on the South Side, not far from where the Obamas first met and had their family.

"And the lessons I learned in these neighborhoods ended up shaping the rest of my life," the former president said. "The Obama Presidential Center is our way of showing young people everywhere that they can do the same.

Former President Barack Obama speaks at the groundbreaking ceremony at the future site of the Obama Presidential Center in Chicago.

Former President Obama emphasized the center was not for nostalgia, but a place to inspire and support a new generation of leaders.

"A campus right here on the South Side where we hope to convene, support and empower the next generation of leaders," he said.

"For us, the Obama Presidential Center means a lot more than just creating a space to house memories from our eight years in the White House," Michelle Obama said. "This investment - this substantial investment in the South Side - will help make the neighborhood where we call home a destination for the entire world."

Former First Lady Michelle Obama speaks at the groundbreaking ceremony at the future site of the Obama Presidential Center in Chicago.

The center is moving forward after several legal challenges and federal review. Amid criticism still that the project is forcing long-time residents out, damaging foliage and wildlife, the Obamas promise to improve on park features and bring jobs and opportunity to those who live nearby.

"And along the way, we want the Obama Presidential Center to change Chicago for the better," the former president said.

"There will be, at the top, a incredible room where people can look out over the Chicago landscape. We'll have a branch of the Chicago Library here. We'll have classrooms and recording studios, where young people can learn how to tell their stories," President Barack Obama said.

The project brought the former president back to the place that launched his political career. He spoke to his foundation's scholars ahead of the South Side center's big moment.

"Seeing President Obama come back to Chicago to make sure his roots are rebuilt, it's really exciting to know he picked Chicago and picked the South Side," said Alex Sims, 2012 Obama campaign regional director.

"I am absolutely confident that when this thing is done, people are gonna say, not only will the park have been enhanced but the people who use it are gonna get a different kind of experience. The young person who's growin' up across the street or down the block or, a few miles away, now suddenly have a place where concerts and speeches and debates and forums are taking place that they can access," he told Roberts.

He went on to say that one of the themes of the center is that "all of us have a role to play in our neighborhoods, in our local communities."

However, the project has not been without roadblocks.

The advocacy group "Protect Our Parks" fought the presidential center plans in federal court over environmental concerns, but in August, a federal judge said they did not meet the requirements for an injunction and denied their motion. The group is now appealing that decision.

"I tell people this all the time- Obama, yes, displacement no," said Dixon Romeo, with the Volunteer Obama Community Benefits Agreement Coalition.

The dedicated South Side activists and the voters who elected Barack Obama have argued loudly for protections for the community's lifelong residents and the environment of Jackson park.

"It reminds me of the deforestation pictures that they show of the rainforest. It absolutely looks totally decimated," said Bren Sheriff with Protect Our Parks. "And that is going to be the view we're going to have for many years going forth."

In September, the city adopted an ordinance for the Woodlawn neighborhood, mandating affordability requirements on all rental and for-sale housing. Still, some have ongoing concerns about the center's impact on poor Black and brown neighborhoods.


Although, for other longtime residents, this is a huge moment for Chicago's South Side.

"He could have put the library anywhere, so to know, he wanted to make sure economic development was here and that organizing here is really exciting," Sims said.

The center will not only house a museum, forum, public library and plaza, but also a playground and pedestrian and bike paths. The Obama Foundation hopes it will bring some 700,000 people to the South Side every year.

"We've set an extraordinarily high bar in terms of making sure that the people in these communities benefit. And we want to make sure that we're hiring people from the community," President Obama said.

A political analyst weighed in on the Obama center groundbreaking Tuesday.