Chicago OEMC dispatchers honored for their life-saving work: 'We're there every minute'

'Our job is to make sure that our officers go home safe.'
WLS
By Tre Ward 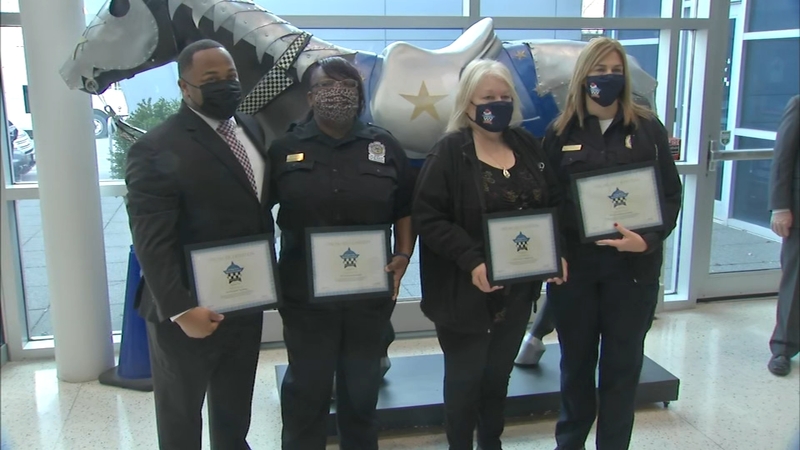 Chicago OEMC dispatchers honored for their life-saving work: "We're there every minute'

CHICAGO (WLS) -- Four OEMC dispatchers were honored Tuesday at the Chicago Patrolmen's Federal Credit Union in the West Loop for their efforts in the face of tragedy.

"Just from my own personal experience, with 37 years on the job, they're our lifeline. I mean, when you need help, you're counting on that dispatcher to get you the help," said Phil Cline, Executive Director, Chicago Police Memorial Foundation.

Dispatchers Suzanne Cassaro and Kathy Kordeleski were on the calls during a foot chase in February of 2018 when Chicago Police Commander Paul Bauer was shot and killed by a now-convicted suspect.

The two dispatchers helped to coordinate the emergency response in the aftermath of his shooting.

"It's an honor to be recognized for this because we often are behind the scenes, but we're there every minute, every foot pursuit, every emergency and our job is to make sure that our officers go home safe," said Cassaro.

Two more dispatchers, Keith Thornton and Patricia Bounds, were honored for their work helping crews when Officer Ella French was shot and killed and Officer Carlos Yáñez was also seriously hurt. It happened during a traffic stop back in August.

"It's something that we do every day and something we'll continue to do until we leave from here," said Bounds. "Otherwise, it's a sad situation, but it's also a great learning experience."

"Obviously, it was a very traumatic experience for us, the officers working the field, but everyone involved, and we just did what we had to do to try to save people," said Thornton. "Though, it was a bad outcome, but we keep pressing and continue to push on. And, wish the police department just blessings each day that they're out there."