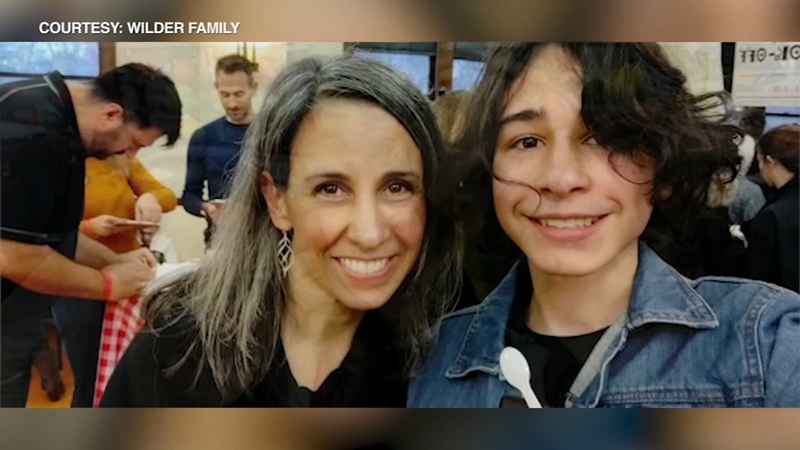 CHICAGO (WLS) -- Three teenage bands hit the stage Saturday, putting on a show to support a 15-year-old musician who was injured in a shootout between police and a suspected bank robber on Chicago's Northwest Side.

Rylan Wilder watched a live stream of the benefit concert from his hospital room. The Lane Tech student was hit by a stray bullet likely from a Des Plaines officer earlier this month as officers pursued a bank robbery suspect who ran inside an Old Irving Park music store where the teen was interning.

Rylan was shot in the arm and stomach.

"I play guitar myself and it's just really his passion being ripped away from him in seconds," said Tommy Langford. "He was at a music store trying to explore his passions, becoming the best musician he can be, and now he has this long journey ahead of him."

Rylan is a member of the band Monarchy over Monday. The group was scheduled to perform Saturday night at Martyr's in North Center with other teenage acts.

Organizers decided to turn the concert into a fundraiser for his growing medical expenses.

The Wilder family's GoFundMe page has already raised tens of thousands of dollars.

"For everyone not able to make it to the show, I hope they donate," said Brennan Quinn. "He's got a lot of medical bills to pay for."

Rylan remains in the hospital after undergoing multiple surgeries. He likely has more to come, but his friends and family are hopeful that they'll see him back on stage soon.

"I would like Rylan to know during this time we are all thinking about him, sending as much positive energy," said Sam Grossman.