Hundreds of charter school students march for peace in Chicago 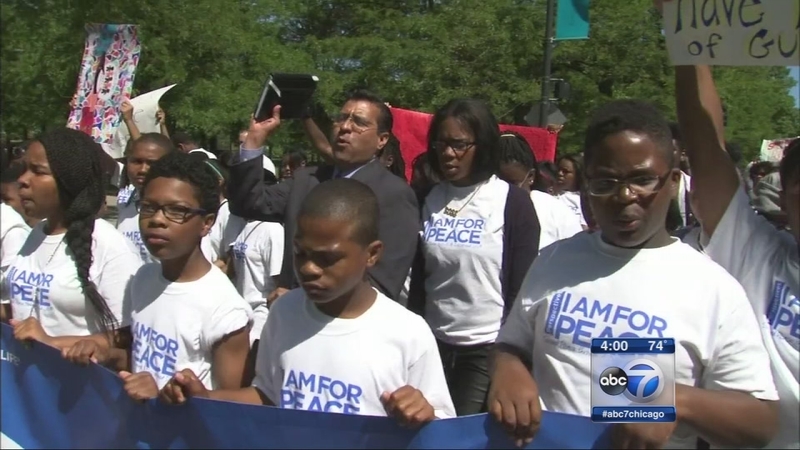 CHICAGO (WLS) -- Thousands of students from Perspectives Charter School's five campuses converged on the Near South Side Thursday morning to rally for peace in their communities.

Students stepped off at 22nd and State streets around 9:30 a.m. The student-led "I am for Peace" march concluded at 36th Street and Wabash Avenue. 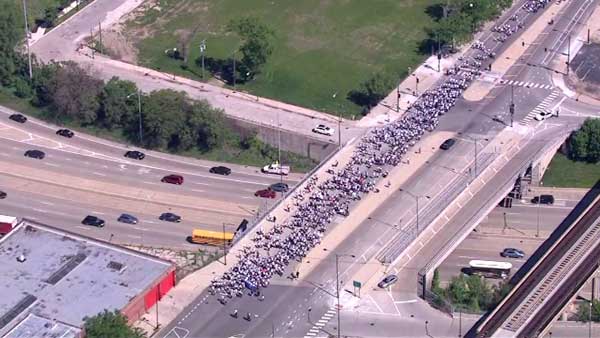 Leaders of the anti-violence movement said they are tired of hearing about shootings in their neighborhoods. Some students said they don't even know if they will survive the summer because of the gun violence in Chicago.

"A lot of teens get killed out here in the streets and it's very dangerous, and we're just trying to make it better for our community," said Jesse Houston, a marcher.

"The message today is to come out, support the peace march, don't be a victim, be a voice," said Razia Hutchins, a march co-organizer.

Hutchins said the idea for the march and rally happened last year during a class discussion about the slaying of 16-year-old Tyrone Lawson. The teen was killed in the parking lot outside Chicago State University after a high school basketball game. Two adult brothers were later charged with the fatal shooting.

"It's the second civil rights movement for our kids, we don't have small plans here," said Diana Shulla-Cose, a Perspectives Charter Schools co-founder.

The teens' march - which was also supported by local business, faith, and community leaders - ended at the school's Joslin campus. Students from Perspectives' South Shore campus marched through their neighborhood Thursday afternoon after the rally.

"When I was growing up in the 60s, the movements came from the kids," said David Storch, Perspectives Charter School board member. "The youth created the change to allow for our culture to evolve the way it has, and I believe we have the same possibility here."

High school senior Kaleiah Spenser said she believes the student-led march could be a turning point for the city.

"I really enjoyed the peace walk because we're standing up for something that teenagers don't deserve," Spenser said. "And little kids - like my cousin was 7-years-old when she lost her life - and that really hurt watching a 7-year-old get carried to a hearse."

Hutchins and her classmates also launched an "I am for Peace" Kickstarter campaign to raise $35,000 to finance a documentary that will show how they plan to combat violence in their city. Footage of Thursday's peace march will be included in the film. They hope to showcase the documentary all over the world.