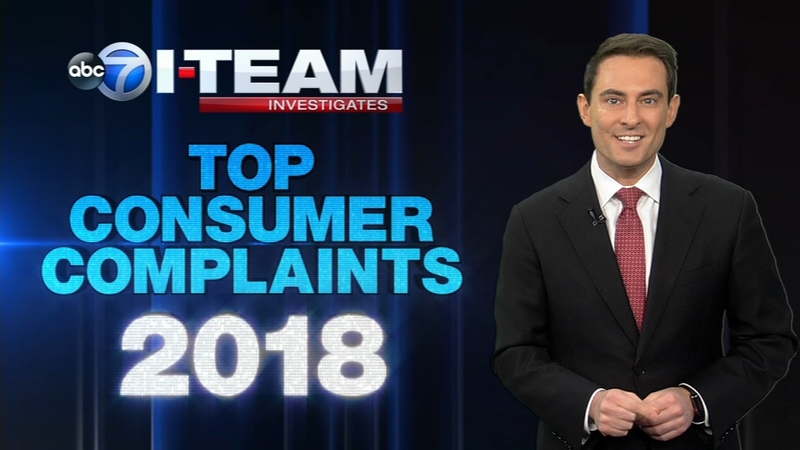 CHICAGO (WLS) -- Contractor complaints and safety concerns with smartphone apps were among what the ABC 7 I-Team found to be the top three consumer complaints in 2018.

Many of these I-Team topics went viral on social media, so they counting them down so you can save money and stay safe in 2019.

"She said my phone was blacklisted and reported as stolen," Jordan Hedgren told the ITeam after unknowingly buying a stolen smartphone online.

Everyone loves their smartphone, but they accounted for a large number of complaints to the I-Team, so many they took third place in most popular consumer complaint.

You should be cautious when buying used smartphones online -- they could be someone's stolen property.

Viewers also contacted the I-Team about smartphone app problems. There are vaults for teens to hide content their parents can't see, and other apps which create anonymous phone numbers that have been used to bully people.

"I started bawling from the horrible things that they were saying to her," said Brandi Klein after her daughter was bullied by a number she couldn't trace.

You should contact law enforcement immediately if your child is being stalked or bullied on their phone and preserve all evidence on at least one thumb drive.

Second on the I-Team's top complaints list is hacks and breaches.

"I logged onto my app and saw that the charges were in Georgia," Stacy Wimunc told the I-Team after her ride share app was hijacked by a hacker.
Her account was sold on the dark web, then used in another state. That issue was just one of many 2018 company security breaches connected to enormous companies.

"More compromises, more breaches that will spread into different industries," he said.

To protect themselves, consumers need to check credit reports regularly, consider credit freezes and fraud alerts, and monitor their credit cards and checking accounts so they can dispute fraudulent charges

There were social media hacks as well.

"With someone else having access you just never know what a person's intents are," said Aaron Campbell, who lost control of his social media site to a hacker.

To avoid this, it's important to choose strong passwords with multiple numbers and symbols, don't use the same password on other accounts, and use two-step-authentication whenever possible.

The I-Team's number one complaint of the year: Home remodeling nightmares.

"That $1,200 is like a mortgage payment to us," said Michelle Simmerman, who was unhappy with her contractor.

The I-Team received hundreds of calls about contractors taking money and allegedly not doing any work, or leaving jobs unfinished.

"It's a safety hazard," said Beverly Carmichale, who was left without a front porch after paying her contractor.

One contractor allegedly lifted the names and logos of reputable businesses to attract customers, then left them hanging.

To prevent being taken in, do your research by asking for references and reading reviews of the company on line and on the Better Business Bureau's website, verify the contractor's license and insurance and get a signed contract and pay with a credit card.

You can also make payments to your contractor in thirds as the work is being done and don't make the last payment until the job is completed and you are happy.

In 2018 the I-Team was flooded with calls about money loss, banking apps and fraud claims.

One of the biggest consumer complaints to the I-Team was financial fiascos connected to new technology.

There can be a price to pay for convenience, the I-Team found.

"I made a mistake of putting in a wrong number. I lost my money," Irving Padilla said about his peer-to-peer payment.

Super-fast peer-to-peer payment apps require precision. Once you hit send, your money is gone. To prevent sending your money to the wrong person, send a dollar first. When the correct person confirms they've received it, send the rest.

Make sure you report mistakenly sent money to your bank and the police immediately and if you receive money mistakenly, return it using the phone number of the sender.

Some callers said their banks denied their fraud disputes. If this happens to you, file a claim with your bank immediately and if they deny it, file a rebuttal and a police report.

Then, there are the fake check scams.

The Better Business Bureau and the Illinois Attorney General said this scam is hitting hard. Fake checks are mailed to your home as part of a phony lottery, romance scam or a work-from-home rip-off. Consumers are told to cash them and send a portion back, but the check bounces and the consumer is on the hook for the whole amount.