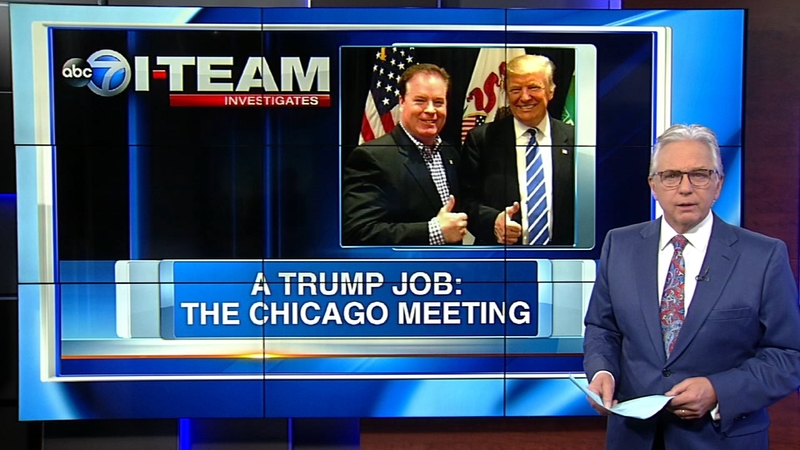 CHICAGO (WLS) -- Shortly after President Donald Trump was elected, congressional Democrats say an economic advisor to his campaign, and Chicago bank executive, was in touch with top military personnel about becoming Secretary of the Army.

The banker, Stephen Calk, met in Chicago on November 16, 2016 with "the Army's Chief of Staff" according to defense department documents obtained by a House Oversight Committee.

Milley has no photos posted of the meeting with Calk, that is said to have occurred in connection with a speech the army official gave to a Chicago business executives luncheon.

The House Oversight Committee is investigating whether that meeting was part of a "quid-pro-quo arrangement to secure Mr. Calk a job in Mr. Trump's administration," specifically the post of Army Secretary.

On Thursday in a letter sent to Calk at his Chicago bank headquarters by Representatives Elijah Cummings and Stephen Lynch sought records related to the banker's communications with Manafort and the Trump campaign and about his bank's loans to Manafort. Cummings is the ranking Democrat on the Oversight Committee, and Lynch is the ranking member of the subcommittee on national security.

"We now request information directly from you about why you were seeking that information and whether your actions were related to a quid pro quo with President Trump's campaign chairman, Paul Manafort," the letter states.

Lawmakers are seeking all communications between Calk and Manafort, Trump campaign and transition officials, and the Defense Department. They also want documents related to the loans made to Manafort, who is currently facing federal money laundering charges in Washington, DC and Virginia. Manafort has pleaded not guilty in both cases.

In his letter to Calk, Cummings wrote that he had been told by the Defense Department that the Army's chief of staff "had the opportunity to engage Mr. Calk on Nov. 16, 2016, when he provided remarks" at a Chicago business event.

The department also reported to committee investigators that Army administrative personnel received a telephone call from Calk sometime in November 2016 "regarding the confirmation process in general."

Mr. Calk's spokesperson has denied any wrongdoing by the banker or his bank. According to a statement provided to the I-Team on Thursday, "The Federal Savings Bank is aware of recent press reports attributed to unnamed 'sources' implying that Paul Manafort obtained loans in exchange for a promise of a position in the Trump Administration. Those reports are simply not true."

The charges against Manafort are related to his consulting work in Ukraine and his bank loans in the U.S., including those from the Federal Savings Bank. The lobbyist-by-trade resigned as Trump's campaign chairman in August 2016.

Calk did not get the nomination as Army Secretary and it is not certain whether he was actually in the running for that or any other post at the Department of Defense.