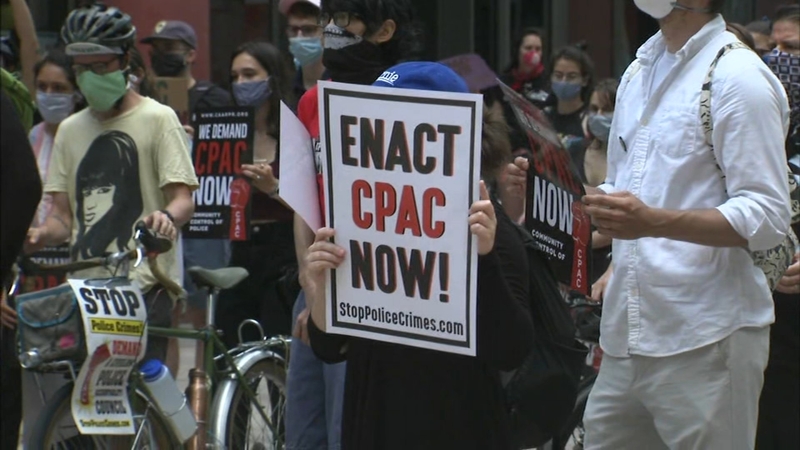 CHICAGO (WLS) -- A group of protesters focused on police accountability and oversight gathered outside City Hall while the Chicago City Council meets virtually to demand Chicago police be removed from the city's public schools.

Demonstrators also called for defunding of the police department and additional reforms.

About 200 demonstrators packed the plaza across from City Hall, and dozens more honked horns and drove around the block to show their support for CPAC, the Civilian Police Accountability Council, as well as Black Lives Matter and removing police from schools.

Aldermen did not take action on those measures Wednesday, but did take steps to help renters as well as to recognize Juneteenth, the holiday that commemorates the end of slavery in the United States. The council passed a resolution supporting Juneteenth as a city holiday.

Mayor Lori Lightfoot said Wednesday she supports the idea of making Juneteenth a city holiday, but said there are fiscal concerns that make it not feasible at this moment.

The council also passed the mayor's spending plan for the $1.1 billion in federal CARES Act funding for COVID-19 relief. Critics tried but failed to get restrictions on money being used to pay for police overtime.

"We have a choice here as a city, we can ensure that every single one of these dollars goes toward real relief, or we can leave the door open for this money to go toward policing," said 35th Ward Alderman Carols Ramirez-Rosa.

Aldermen also approved a resolution to help renters with a $20 million relief package, but it did not include exceptions to help landlords with six units or less.

"You are shifting the burden on the small unit owners, asking them to shoulder the burden for their tenants," said 15th Ward Alderman Ray Lopez.

"What it does, it encourages tenants and landlords to work together to work out a payment plan and pay that back," said 48th Ward Alderman Harry Osterman.

The council did not take up the demands to get CPD out of CPS schools. Mayor Lori Lightfoot has dismissed the idea of taking cops out of high schools, saying they're necessary.

Alderman Roderick Sawyer of the 6th Ward introduced an ordinance to end the police department's contract with CPS and reinvest in mental and behavioral health services.

"I support the police in their initiatives to do what's right throughout the community, I just don't think the police are prepared to act as school monitors inside certain school buildings," Alderman Sawyer said.
The ordinance was assigned to the Rules Committee.

Meanwhile, 41st Ward Alderman Anthony Napolitano said in a tweet that he plans to introduce a resolution. He wants aldermen who support defunding the police department to agree to move at least half of the officers in their wards to other aldermen who want more cops in their areas.

Napolitano is a former CPD officer and firefighter whose ward is home to many police officers and firefighters. His critics said this is merely a stunt as he is against defunding police.