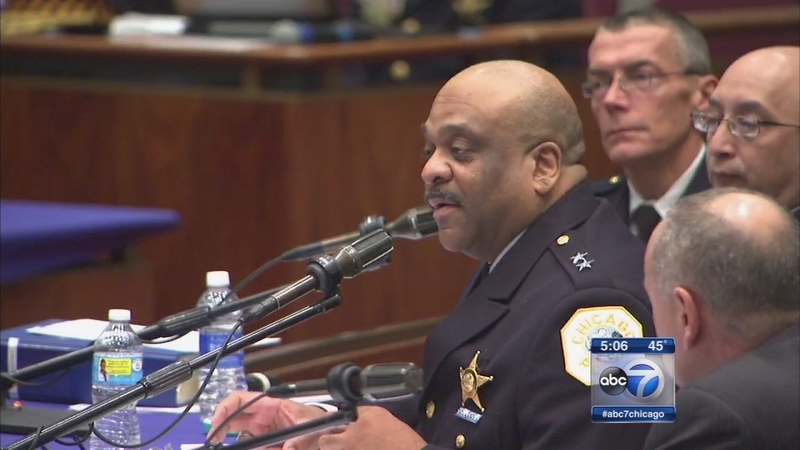 After a mini-debate over whether to bypass the Chicago Police Board, the Chicago City Council Public Safety Committee held what amounted to a confirmation hearing for superintendent-to-be Eddie Johnson.

"My end goal with appointment to superintendent is one thing, and that's to make the city of Chicago better than when I got here," Interim Supt. Eddie Johnson said.

Johnson offered virtually no new details on his plan to reduce Chicago's violence and to restore police morale. He would not rule out hiring more officers as a way to fight the city's crime that the 27-year veteran is driven by a relatively small number of bad actors.

Johnson did not apply for the superintendent's job, but was tapped by Mayor Emanuel after rejecting the three candidates nominated by the Chicago Police Board after a nearly three-months-long, half-million-dollar nationwide search.

The council's public safety committee debated whether to temporarily suspend the law requiring the mayor to select from police board recommended candidates so Johnson can get the job.

"There's no reason to have one criteria for one individual and not have it open and fair and transparent for everybody else," said Ald. William Daley Thompson (11th Ward).

"I think if we do this now, it sets a dangerous precedent," said Ald. Susan Sadlowski Garza (10th Ward).

But committee members approved the ordinance to suspend the law for 30 days. Alderman Walter Burnett (27th Ward) cited an emergency need for a new superintendent.

"We need to do what's right, get this man in there to take care of the business. We don't have time to play," Burnett said.

On Wednesday, the full council will vote on temporarily changing the way the police superintendent is selected to allow Johnson's appointment. If passed, after 30 days the ordinance will sunset and the selection process will again involve the police board - the way it's been done since 1960.