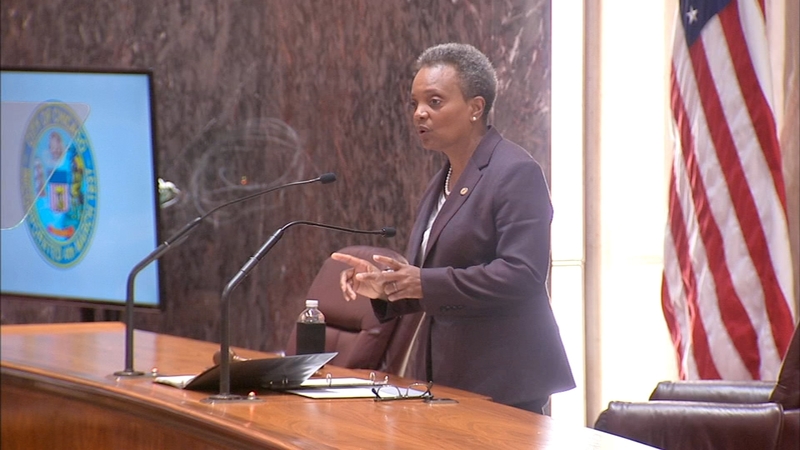 CHICAGO (WLS) -- Mayor Lori Lightfoot delivered her budget address before City Council Wednesday, outlining her proposal on how the city will deal with an $838 million budget deficit.

The city is in the red and taxpayers are hoping to avoid a property tax hike.

It calls for $538 million in savings and efficiencies and $352 million in new revenue. The biggest question mark in the mayor's budget is the money she's counting on from a real estate transfer fee, which would require approval from Springfield.

If that doesn't happen, it could mean there will have to be a property tax increase.

"But this budget is more than just a math problem," Lightfoot said. "It's a values statement for what we prioritize and the kind of city we want to be."

She's also expecting an additional $50 million from increasing the real estate transfer fees on properties over half a million dollars. But that had many aldermen concerned because it will require lawmakers in Springfield to approve it.

"I can't predict what the Legislature will do. I mean, obviously, they know this is a critical piece of our budget and hopefully they will support the request that we're making to Springfield," said Ald. Pat Dowell, chair of the Budget Committee.

RELATED: Proposed Chicago ride-share tax would levy up to $3 in taxes, fees to downtown fares

Ald. Ray Lopez said he believes the proposal allows Lightfoot to say she presented a budget without property taxes.

"But if things don't go her way, it'll fall on aldermen to have to come up with a possible solution, presenting a property tax to balance our budget," Lopez said.

The mayor made it clear that without help from Springfield, she could be forced to increase property taxes.

"But I have full confidence that we will be able to work without partners in the state capital to keep that from happening," Lightfoot said.

Ald. Ariel Reboyras of Chicago's 30th Ward said, "I support anything over property tax increases, let's put it that way, everything and anything."

While Lightfoot is proposing raising the tax on all food and drinks sold at Chicago restaurants by a quarter of a percent, restaurant leaders said it adds up, especially in an industry with razor thin profit margins.

"The business community never likes a tax increase and today, we see a tax increase on the culinary capital of the United States," said Sam Toia, president and CEO of the Illinois Restaurant Association.

Parking costs might go up as well under Lightfoot's plan. The proposed budget includes increasing downtown parking meter rates and installing new ones in the West Loop. That's in addition to raising the tax on solo Uber and Lyft riders.

"They are better than a general tax increase because you can avoid them," said Laurence Msall of Civic Federation. "You can avoid ride-sharing tax by taking public transportation."

While there are questions, there was also praise for the mayor's budget.

"I think there were many things that were promising in the budget, promising hundreds of millions of dollars in savings through efficiencies without adversely impacting city services, that sounds great," Ald. Carlos Ramirez-Rosa. "Ultimately we've got to look line by line to see if that is in fact the case."

The mayor is also counting on money from recreational marijuana sales, which will begin January 1. But Lightfoot didn't mention anything about revenue from a potential Chicago casino. She's still waiting for help from Springfield to get the tax structure re-written on that to help make the casino financially feasible for investors.