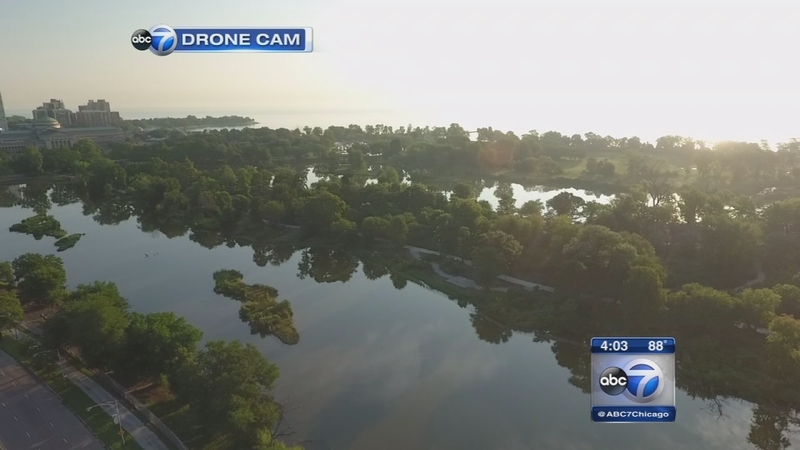 CHICAGO (WLS) -- The head of the Obama Foundation, as well as local dignitaries, made the formal announcement Wednesday that Jackson Park will officially host the Obama Presidential Center.

"The President and First Lady are proud that the Obama Foundation is developing the Obama Presidential Center on the South Side, a community that they call home. Of course we all know the South Side is a historical place with vibrant institutions such as the DuSable Museum, the University of Chicago and the Museum of Science and Industry," Obama Foundation Chairman Marty Nesbitt said.

The Obama Foundation executives, Mayor Rahm Emanuel and several aldermen cheered this addition to Jackson Park and to the South Side of Chicago.

"It's a once-in-a-lifetime opportunity to then make a series of investments that affect the entire South Side," Emanuel said.

The Golden Lady - a replica statue from the 1893 Columbian Exposition - greets visitors to Jackson Park, where work is currently being done to restore native plants and species to the Park's Wooded Island. While the park spans 500 acres from the lakefront west to Stony Island, the actual proposed site for the center will be on its western edge, along Stony Island south of 61st Street.

"You don't have to get on a plane to go see rare species, you can be right here on the South Side," Umek said.

Some want the park and its inhabitants protected and to remain free of another institutional draw.

The Friends of the Parks, the organization that sued and essentially canceled the plans for the Lucas Museum in Chicago, released a statement Wednesday saying that it "warmly welcomes the Obama Library to Chicago's South Side, but reiterates dismay at the use of existing parkland in Jackson Park rather than abundant vacant land nearby."

Regarding the choice of Jackson Park over Washington Park, Nesbitt said it was a difficult decision because the parks are so close together. Either way, he said, it is a win for this entire area. He also promised economic development for the entire area, not just around Jackson Park.

"We just think that it will attract visitors on a national level, a global level," Nesbitt said.

Last month, the Barack Obama Foundation announced that Tod Williams Billie Tsien Architects had been chosen to lead the project.