Students will walk out of class Wednesday to demand gun control, remember Parkland 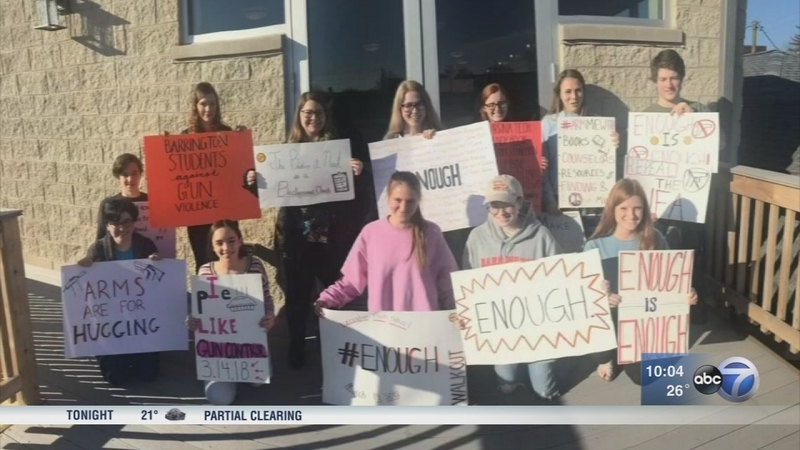 BARRINGTON, Ill. (WLS) -- A nationwide student walkout at 10 a.m. Wednesday marks the one month anniversary of the Parkland school shooting and also serves as a demand for more gun control.

Students in the city and across the Chicago area will be participating, and their message has been modified due to Governor Bruce Rauner's veto of legislation requiring gun dealers to be licensed by the state.

At some schools administrators are threatening discipline for students who walk out. At Barrington High School, a march and rally are planned, but students who leave class will be marked absent and if they leave campus, they will receive and unexcused absence.

Signs and have been made and students say they're ready for the walkout.

"I think that for once we're really coming together to be unified, that we all really care about and think that it's time for there to be change," said Syd Baka, senior.

The walkout includes a march from the school to a park. Around the same time, at Naperville North High School, 17 minutes of silence will be observed in honor of each Parkland victim.

In Chicago, students from three schools including St. Sabina will release balloons in a South Side park.

"There's something happening now that has not happened in a long time. There's this energy and this kind of wave of consciousness," said Father Michael Pfleger, St. Sabina Church.

But the head of the Chicago Republican Party is threatening a lawsuit, accusing some CPS principals of forcing students to participate.

"This is just straight-out political indoctrination. It's wrong. School is not the place for this kind of thing," said Chris Cleveland, Chicago Republican Party chairman.

Gun rights supporters are planning their own rallies, including at Romeoville High School as well as at Barrington. And that's fine with Syd Bakal.

"It's important that everybody is getting engaged in this conversation because that's what it needs to be," he said.