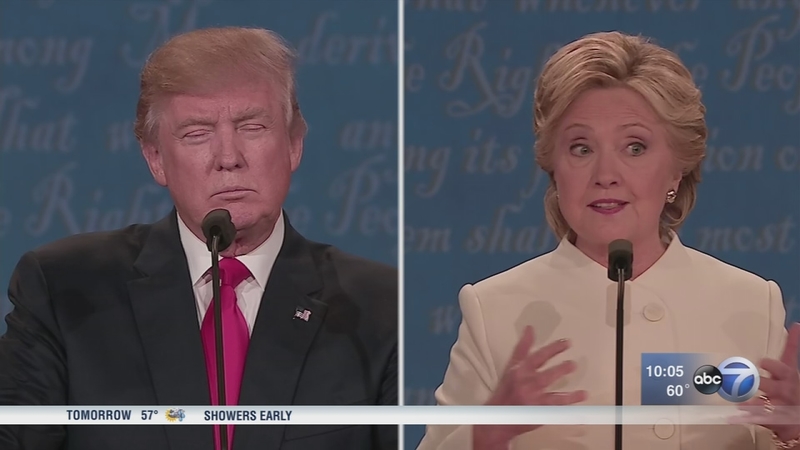 LAS VEGAS (WLS) -- While the personal barbs flew again, at times sounding like a playground argument, compared to the previous two debates there were many more substantive statements on the issues from both candidates to be fact-checked. The TruthSquad begins with Chicago violence.

"Let me just tell you before we go any further, in Chicago, which has the toughest gun laws in the United States," Trump said during the debate.

That is false. It used to be correct. But now Illinois has conceal-carry and the Supreme Court struck down the city's handgun ban in 2010.

"Probably you could say by far they have more gun violence than any other city," Trump also said.

That is true. It's the worst violence in 20 years, but police say at least 60 percent of the guns that are used in the violence come from other states with lax laws.

Secretary Clinton was truthful with a statement on hackers.

"This has come from the highest levels of the Russian government, clearly from Putin himself, in an effort, as 17 of our intelligence agencies have confirmed to influence our election. So I actually think the most important question of this evening, Chris, is finally will Donald Trump admit and condemn that the Russians are doing this," Clinton said.

The director of U.S. Intelligence says it has been determined that "the Russian government directed" recent hacks in an attempt "to interfere with the U.S. election."

"I never met Putin. This is not my best friend," Trump said.

That is a flip-flop. For years, Trump touted his relationship with Putin. In 2014, he said he got a gift and personal note from the Russian president.

Trump accused Clinton of trying to hide her desire for open borders, detailed in a 2013 speech made public by WikiLeaks.

"Please, quiet, everybody. Is that your dream, open borders?" asked moderator Chris Wallace.

"Well, if you went on to read the rest of the sentence, I was talking about energy," Clinton responded.

That is half-true. She was actually talking about more than energy, but apparently less than an open border for immigrants to enter the U.S. at will, according to the partial transcript from WikiLeaks.