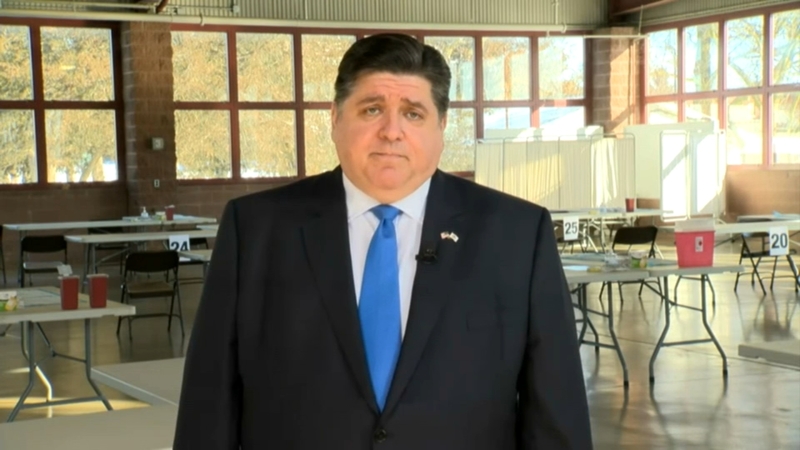 "I had bolder plans for our state budget than what I am going to present to you today. It would be a lie to suggest otherwise. But as all our families have had to make hard choices over the last year, so too does state government. And right now, we need to pass a balanced budget that finds the right equilibrium between tightening our belts and preventing more hardships for Illinoisans already carrying a heavy load," Pritzker said in his prerecorded budget address.

The governor is proposing a $42 billion spending plan for the next fiscal year that incorporates $700 million in spending cuts for state agencies. The Department of Children and Family Services will see an 8% increase in funding to hire more staff to reduce caseloads. Funding for K-12 and higher education will also be protected at current levels.

"At its core, our pandemic response is focused on saving lives and protecting working families. We've helped keep tens of thousands families from losing their homes, kept them fed, and ensured their children had a safe place to go each day. This pandemic isn't over yet, so that remains our guiding light for this fiscal 2022 budget proposal," Pritzker said.

After Republicans helped defeat Pritzker's graduated income tax amendment in November, the governor is now proposing to eliminate some of the corporate tax loopholes he agreed to in 2019 to get Republican support for his budget.

In total, Pritzker wants to eliminate $932 million in corporate loopholes, including capping deductions for operating losses, eliminating the repeal of the franchise tax, putting a cap on the discount for retailers collecting sales tax and lowering the credit for donations to private school scholarship funds.

"At a time when businesses across the state are grasping at straws just to stay afloat after being shuttered due to executive orders, Governor Pritzker is now proposing a tax increase on all of them saying they are just loopholes," said State Rep. Jim Durkin, the House GOP leader.

The governor expressed his frustration with Republicans for not offering any solutions of their own.

Gov. JB Pritzker will give his Illinois budget address on Wednesday, and there's already a major budget battle between the two parties brewing.

"Two months ago I asked Republicans in the General Assembly for their proposals to close this year's budget deficit. I was met with silence. Apparently their idea of bipartisanship ends when hard choices must be made," Pritzker said.

Democrats who hold super majorities in the House and Senate called the Governor's fiscal plan a "good faith budget" and expressed support for closing the corporate loopholes.

"I thought that the speech represented a good first step towards addressing the fiscal challenges that are before us," said State Sen. Elgie Sims, D-Chicago and south suburbs. "It makes the very best of a very difficult situation."

To help those who have lost jobs during the pandemic Pritzker is asking for an additional $60 million appropriation for the Department of Employment Security to increase staff and to fund call centers. In addition, he is asking for another $73 million next year.

The budget also calls for continued work on capital construction projects that are part of the six year Rebuild Illinois plan with funding for roads and bridges, higher education facilities as well as money to continue to expand access to high-speed internet.

Meanwhile the state is still waiting to learn how much it might receive from the federal government in the next COVID-19 relief bill.

"Let's be clear. Congressional action will help us today, but it won't solve Illinois' remaining fiscal challenges. That's why any money we receive from the federal government needs to be spent wisely, by paying down borrowing and our bill backlog. Anything remaining must be used to invest in expanding jobs and economic growth. More jobs, more businesses, more economic activity - means a higher standard of living for our citizens, a healthier budget and a healthier state government," Pritzker said.

Pritzker said this budget will be challenging, but he expressed optimism that there can be a cooperative spirit in the Legislature. Democrats hold super majorities in both the House and Senate.

"Compromise, hard work, and a willingness to make tough decisions is going to be required of all of us. I enter the process of negotiation with an open mind. I have only one hard and fast rule - we aren't going to treat people who have been decimated by this pandemic as roadkill. Those most in need in our most desperate times deserve our help, and we cannot fail them," Pritzker said.
Report a correction or typo
Related topics:
politicsillinoisbudget cutsjb pritzkerillinois budgetgeneral assemblycoronaviruscoronavirus pandemiccovid 19 pandemiccovid 19
Copyright © 2021 WLS-TV. All Rights Reserved.
ILLINOIS BUDGET
Moody's upgrades Illinois' bond rating for first time in 20 years
$42.2B state budget proposal moves to Gov. Pritzker's desk
IDES asks for millions more in budget as it plans to reopen offices
Illinois budget battle brewing ahead of Pritzker's address
TOP STORIES
2 officers hurt, 21 arrested in Loop amid rash of violence: police
OPRF could resume extracurricular activities as soon as Tuesday
Man says he helped parents of accused Michigan school shooter
Iman Shumpert talks about winning 'Dancing With the Stars': EXCLUSIVE
27 shot, 6 fatally, in Chicago weekend violence: CPD
Minnie Minoso elected to Baseball HOF
Peoria County corrections officer dies from COVID-19
Show More
Fire breaks out at Hammond law office of murdered attorney
Community Christmas tree burned in Washington Park
Biden administration to announce Beijing Olympics diplomatic boycott
Omicron updates: New US travel rules go into effect Monday
Chicago Weather: Windy, chilly Monday
More TOP STORIES News