'It would cause irreparable damage to our residents, children, businesses and property owners,' says Itasca mayor
WLS
By John Garcia 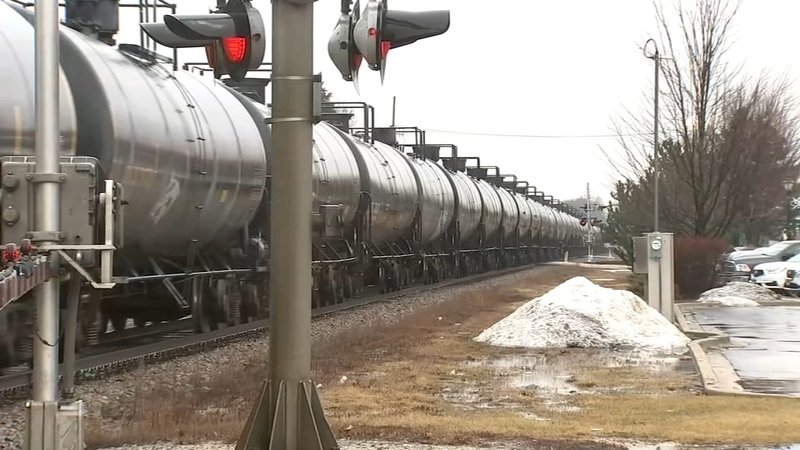 ROSELLE, Ill. (WLS) -- The sound of trains rumbling through the northwestern suburbs.

They take cars and trucks off the road, moving people and goods more efficiently. But the mayors of eight towns along the Milwaukee District West Line are trying to stop a merger that they say would increase train traffic by 300%.

"It would cause irreparable damage to our residents, children, businesses and property owners," Itasca mayor Jeff Pruyn.

The Canadian Pacific railroad plans to merge with the Kansas City Southern Line which will provide a rail link from Canada to Mexico.

The length of the freight trains going through towns would stretch up to two miles long, potentially blocking all the crossings in Itasca at once. It's a big concern for the fire department which sits on the south side of the tracks, while much of the residential area is on the north side.

"About 48% of our calls are on that side of the track. We're a small community and it's important that we are able to respond to emergencies quickly," Chief John Buckley, Itasca Fire Dept.

The coalition of eight mayors opposing the merger also expressed concerns about hazardous materials being transported through their communities.

The Italian Pizza Kitchen in Roselle sits right next to the tracks and the owner said he's concerned long freight trains will be a problem for his customers and delivery drivers.

"It cuts the town in half and we can't get around certain aspects due to the train alone," said owner John Scianna.

Railroad officials said they have met numerous times with each of the communities in a statement saying "We recognize that we will be increasing the number of trains that operate through some communities and understand the community concerns being expressed. We are talking directly to suburban leaders and we will work hard to be a good neighbor."