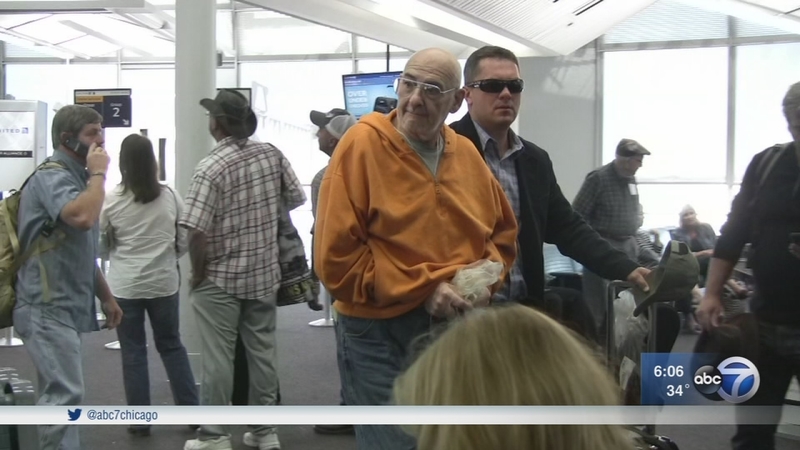 CHICAGO (WLS) -- A man jailed in connection with one of the Chicago area's most abhorrent murder cases has been paid $6,000 in taxpayer funds by Cook County to settle a lawsuit, the ABC7 I-Team has learned.

Robert Serritella, 75, is awaiting trial in the strangulation killing of teenager David Chereck in 1992. The 15-year-old was murdered on New Year's Day, according to investigators, not far from his family's home in Skokie.

Serritella, a convicted sex offender and predator who prosecutors say has admitted to having sex with underage boys, filed a federal disability lawsuit against Cook County in May 2016. In the complaint, the accused child-killer claimed that county sheriff's officials confiscated his "set of corrective custom made leg braces" when he was booked for Chereck's murder in August, 2014. Serritella claims to have rheumatoid arthritis in both knees and difficulty walking without the braces.

When the I-Team met him at O'Hare Airport in 2014 he walked off a flight from Los Angeles where he had been arrested by U.S. Marshal Service deputies and Cook County sheriff's investigators. In his original, hand-written federal court filing Serritella stated that, "Chuck Goudie and camera man of Channel 7 Eyewitness News team that met plane upon arrival" and witnessed that he had leg braces at the time. He was then put in a wheelchair at the airport. News video show what appear to be orthotic braces in a clear plastic bag.

Serritella had been a suspect in the teen's murder from the beginning 25-years ago. A man walking his dog found Chereck's body in the Linne Woods Forest Preserve in Morton Grove. Prosecutors allege Serritella lured Chereck into his vehicle, then strangled the boy with his own scarf. When the I-Team questioned Serritella in 1998 about what happened that night, he provided specific details of what happened to Chereck.

"I was travelling about 35 miles per hour and I don't know why he's waving so I stopped, and when I had stopped I looked in the rear view mirror and there was another white car, similar to mine, that this boy jumped into and they took off, and as they passed me I took a look over into the car and I had a good description of the boy and the driver," said Serritella.

Despite Serritella putting himself near the crime scene and the victim, the case was fumbled by forest preserve police who actually lost track of Serritella when he moved out west even though he was still a registered sex offender. When the I-Team found him in 1995 and interviewed him, it was an interview that would become central to finally obtaining charges in the case two decades later.

As the accused killer sat in jail while his murder case winds through the courts, he filed the federal suit asking for $5 million in damages from Cook County because of the leg braces.

On Wednesday the county approved paying him $6,000 to "to avoid the costs of litigation," according to Cara Smith, the chief policy adviser for Sheriff Tom Dart.

"The Sheriff maintains that braces could be a weapon, likes canes and crutches," said Chicago attorney Kenneth Flaxman, Serritella's attorney in the leg brace claim. "We have represented disabled detainees who need these assistive devices as well as detainees who suffered personal injuries when the assistive device was used as a weapon. So the Sheriff's position is not without some merit."

As the braces were "probably destroyed by the Sheriff's Police when Mr. Serritella did not have someone pick them up," Flaxman said that destruction of the property was the main thrust of the case. He calls the settlement "a reasonable resolution of a difficult case."

A more difficult case is yet to come for Serritella: the murder case. He now has a public defender in that case, which is back in court on January 9th for a status hearing. No trial date has been set.