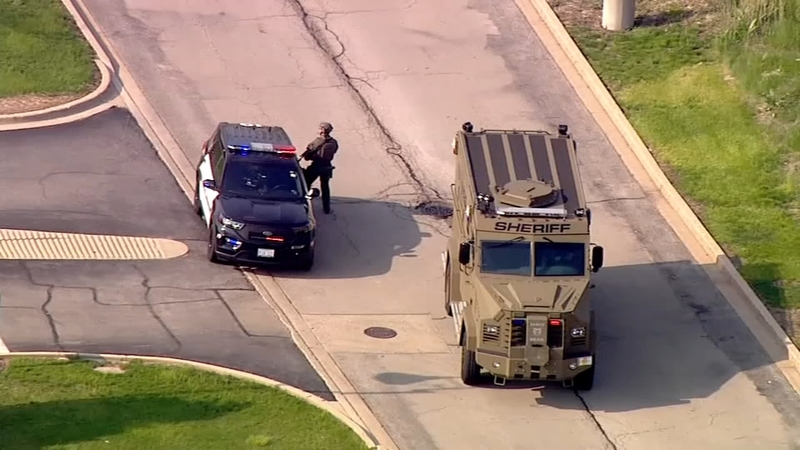 Romeoville police said they were called to the bank at 275 S. Weber Road around 3:40 p.m. after receiving several reports of an armed person inside the building demanding that officers respond.

Romeoville police said they were called to the Fifth Third Bank branch around 3:40 p.m. after receiving several reports of an armed person inside.

Romeoville officers were able to communicate with the individual, who allowed the hostages inside the business to walk out to waiting officers.

Witnesses told police the suspect had a gun and had fired the weapon inside the bank several times.

Will County SWAT responded to the scene and relieved Romeoville police officers of their positions on the perimeter of the building.

"I heard 'copters above my house and I came outside and I saw SWAT blocking off the intersection," said Lisa Coleman, witness.

At least one person was seen being wheeled out of the bank on a stretcher.

"We did hear one shot and everybody was kind of ducking and almost hitting the ground," Coleman said. "It was very scary, because nothing never happened like this out here in Romeoville. It never."

Police said paramedics immediately rendered aid to the suspect and rushed them to a hospital, where they died of their injuries. The person's identity has not yet been released.

There are now two investigations being conducted: one into the motives behind the armed suspect, and another Illinois State Police investigation into the exchange between the SWAT officer and the suspect, which led to the suspect's death.

Police called it an "isolated incident" and said it did not appear to be a bank robbery.

Nearby residents said they were startled by a loud noise.
"It sounded like a gunshot came in the building, or a canister got shot in," witness Peter Mars said. "Everyone walking in the building, it seemed like they defused the situation, but I'm not sure."

Police had shut down Weber Road between Highpoint Drive and Airport Road, but it has since reopened to traffic.