Dad of bullied girl who killed herself: 'Right now was going to be her time to shine' 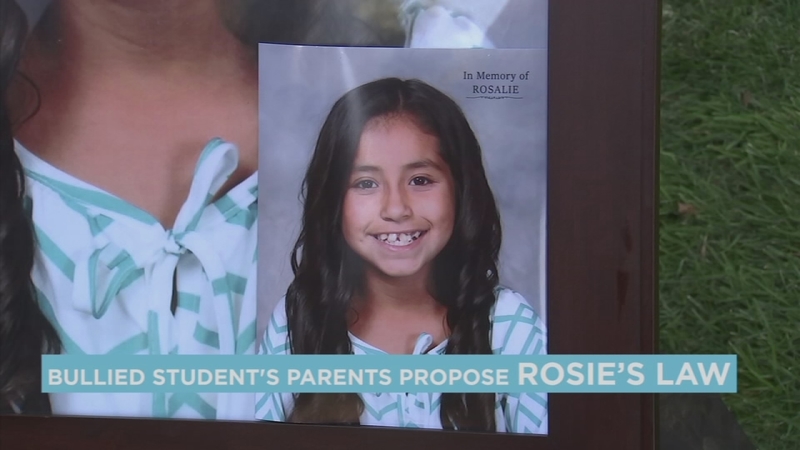 CALIMESA, Calif. -- The father of a girl who killed herself amid severe bullying said his daughter's dreams were shattered at a time when she was just beginning to blossom.

Freddie Avila spoke alongside his family attorney Brian Claypool during an emotional press conference on Monday.

Avila's daughter, Rosalie Avila, attended Mesa View Middle School in Calimesa, which operates under the Yucaipa-Calimesa Joint Unified School District. The 13-year-old took her own life by hanging herself in her bedroom on Nov. 28.

According to Rosalie's family and Claypool, the little girl suffered months of bullying from classmates. They said Rosalie was taunted, called derogatory names such as a whore and slut, was told she was ugly and had ugly teeth, and told she had sexually transmitted diseases.

At the press conference, Claypool held up a photo of a smiling Rosalie. He then held up a different photo that showed the girl looking upset.

The father of an I.E. girl who killed herself amid bullying said his daughter's dreams were shattered at a time when she was just starting to blossom.

"Does the Rosalie Avila in this picture look like a young girl that was being protected by a school district from bullying? Does she?" Claypool said.

Freddie Avila said his usually happy daughter stopped smiling over the last month or so. He said his daughter would tell him that kids at school were making fun of her braces. He said he would reassure her that she's beautiful, no matter what.

He said his daughter had dreams of having a family and a house of her own one day.

Freddie Avila spoke through tears as he wore a black T-shirt emblazoned with his daughter's smiling face with the text: STOP BULLYING.

Claypool said he put the Yucaipa-Calimesa Joint Unified School District on notice on Monday about his plans to sue for the wrongful death of Rosalie.

"Make no mistake about it. The school districts not only in California but nationwide have a legal duty to protect children from abuse in schools," Claypool said.

Claypool said Rosalie wrote a suicide letter to her parents before she died, saying that she didn't want her picture put up at her funeral.

"The fact that this little girl would be so verbally abused at a school to a point where she writes a suicide note to her parents saying she doesn't even feel like she's worthy of a picture at her funeral, speaks volumes," Claypool said.

The Avila family said in October Rosalie began cutting her wrists because of the verbal abuse she was suffering.

Her classmates are also accused of circulating a video that showed what they considered an ugly girl, using a photo of Rosalie, in comparison to what they considered a pretty girl. According to the family attorney, the video went viral online and in Rosalie's suicide note she apologized to her parents for "being ugly."

Mesa View Middle School in Calimesa was aware of not only her verbal abuse but her self-cutting, according to Claypool.

Freddie Avila said he and his wife were at the school continuously to address the bullying issue surrounding Rosalie.

"The parents of Rosalie complained repeatedly to this school district about their little girl being bullied at school," Claypool said, adding that the school has a tendency to demonize and blame the victims of bullying.

Claypool accused school districts in general of treating the topic of bullying as "taboo."

"Because every kid who they kick out of school for bullying, every kid who doesn't choose to go to their school because of bullying means one thing - that means that that school loses funding. That school loses state and federal funding," he said. "School districts are not legitimately investigating bullying because they don't want to lose money."

The lawsuit against the school district will claim that the school was negligent and failed to take appropriate action to keep Rosalie safe. It also accuses the school of failing to take action against the bullies and allowing them to continue their abuse despite officials being aware of Rosalie's "frail condition."

The school district wouldn't comment specifically on the matter but gave ABC7 a statement that read, in part: "We are cooperating fully with the Sheriff's office as it conducts its investigation.... Given that these efforts are ongoing, and due to our commitment to protecting the privacy of our students and their families, we cannot share any details at this time."

Claypool and the Avila family also announced their plan to advocate for new nationwide legislation regarding bullying that they are calling Rosie's Law.

They want to advocate for stricter anti-bullying laws that would treat verbal abuse in schools the same as physical abuse, which would mean harsher punishments for bullies.

Claypool, who is based out of Pasadena, said he will be approaching Rep. Adam Schiff to speak about the legislation this week.