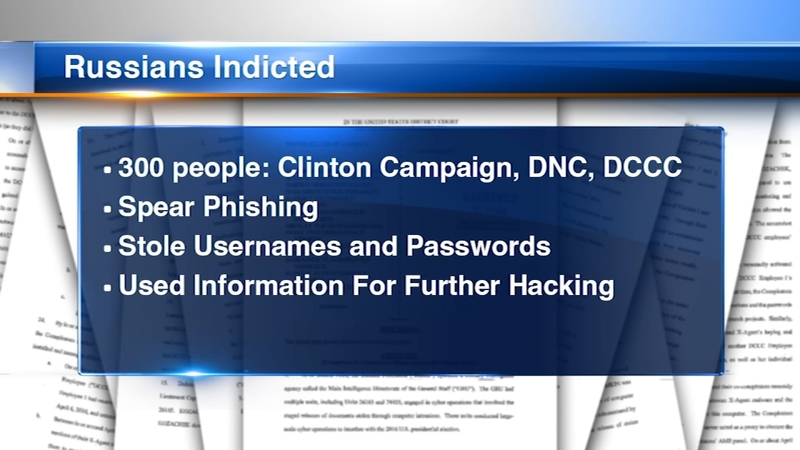 WASHINGTON -- Twelve Russian intelligence officers hacked into the Democratic National Committee and the Clinton presidential campaign in the run-up to the 2016 election and released tens of thousands of stolen communications in a brazen effort by a foreign government to meddle in U.S. politics, according to a grand jury indictment announced Friday.

The indictment stands as the clearest Justice Department allegation yet of Russian efforts to interfere, through illegal hacking, in the U.S. presidential election before Americans went to the polls - and the first to implicate the Russian government directly. It had been sought by special counsel Robert Mueller and comes days before President Donald Trump holds a summit with Russian President Vladimir Putin.

U.S. intelligence agencies have said the meddling was aimed at helping the Trump campaign and harming the election bid of his Democratic opponent, Hillary Clinton. The effort also included bogus Facebook ads and social media postings that prosecutors say were aimed at influencing public opinion and sowing discord on hot-button social issues.

The system that was breached was the Illinois voter registration system.

The I-Team reported on that cyber breach, which was confirmed by the Illinois Board of Elections, in August 2016. Federal law enforcement officials said they uncovered evidence that foreign hackers had penetrated the state election database. 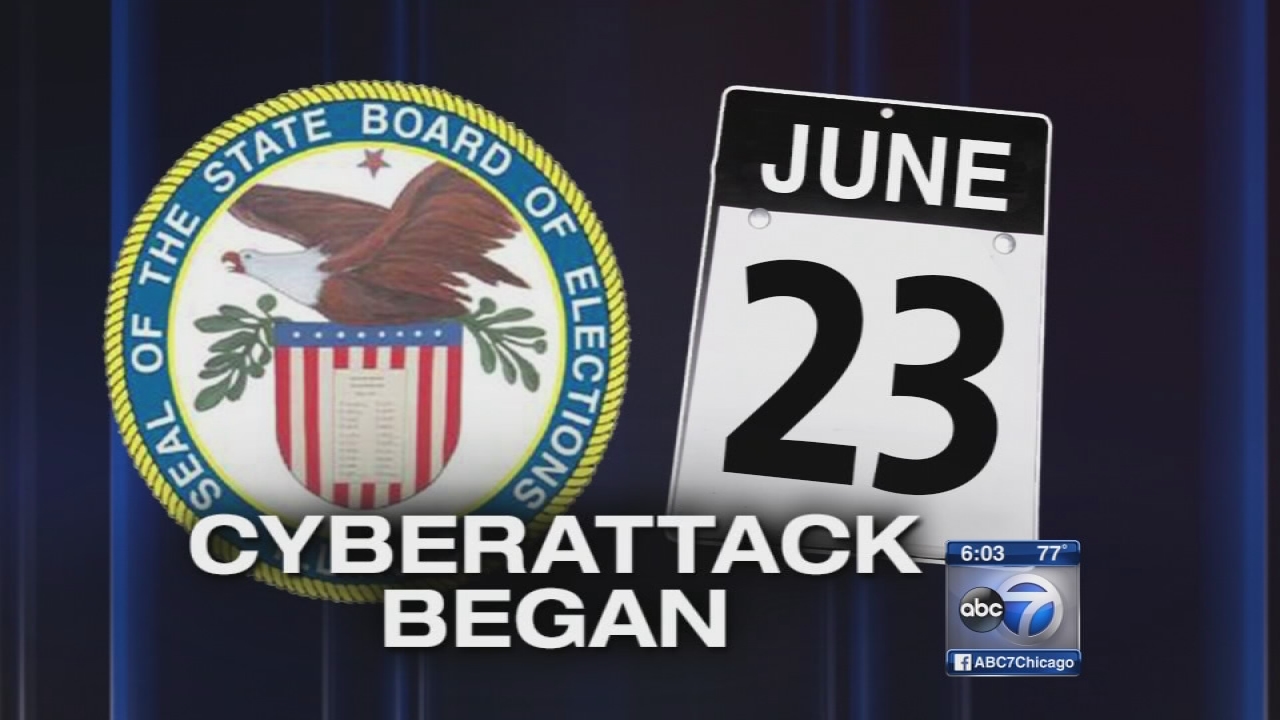 The Kremlin denied anew that it tried to sway the election. "The Russian state has never interfered and has no intention of interfering in the U.S. elections," Putin's foreign affairs adviser, Yuri Ushakov, said Friday.

But the indictment identifies the defendants as officers with Russia's Main Intelligence Directorate of the General Staff, also known as GRU. It accuses them of covertly monitoring the computers of dozens of Democratic officials and volunteers, implanting malicious computer code known as malware and using spearphishing emails to gain control of the accounts of people associated with the Clinton campaign.

By June 2016, the defendants began planning the release of tens of thousands of stolen emails and documents, the indictment alleges. The messages were released through fictitious personas like DCLeaks and Guccifer 2.0.

The National Association of Secretaries of State released this statement Friday:

"In light of today's indictment of Russian citizens by Special Counsel Robert Mueller, the members of the National Association of Secretaries of State (NASS) would like to respond. We are only aware of one state voter registration system that was penetrated and that office made a public statement at the time. Since the 2016 election, states have drastically ramped up their cyber postures with penetration testing, risk and vulnerability assessments, tools from EI-ISAC, DHS, the private sector, the National Guard and universities. Additionally, Congress recently appropriated $380 million in Help America Vote Act funds to aid Secretaries in improving cybersecurity. As we gather this weekend for our annual Summer Conference, we will continue to discuss election cybersecurity efforts and tools for the 2018 election and beyond."

On April 28, 2016, prosecutors said the alleged conspirators connected to and used the same computer in Illinois and later used X-Tunnel to connect to the computer and steal additional documents from the DCCC network.

The charges come as Mueller continues to investigate potential coordination between Russia and the Trump campaign to influence the presidential election. The indictment does not allege that Trump campaign associates were involved in the hacking efforts or that any American was knowingly in contact with Russian intelligence officers.

The indictment also does not allege that any vote tallies were altered by hacking.

Still, Deputy Attorney General Rod Rosenstein said the internet "allows foreign adversaries to attack Americans in new and unexpected ways. Free and fair elections are hard-fought and contentious and there will always be adversaries who work to exacerbate domestic differences and try to confuse, divide and conquer us."

Before Friday, 20 people and three companies had been charged in the Mueller investigation. The 20 are four former Trump campaign and White House aides, three of whom have pleaded guilty to different crimes and agreed to cooperate, and 13 Russians accused of participating in a hidden but powerful social media campaign to sway U.S. public opinion in the 2016 election.

If the involvement of the GRU officers in the hacking effort is proved, it would shatter the Kremlin denials of the Russian state's involvement in the U.S. elections.

The GRU, which answers to the Russian military's General Staff, is part of the state machine and its involvement would indicate that the orders to interfere in the U.S. election came from the very top.

Hours before the Justice Department announcement, Trump complained anew that the special counsel's investigation is complicating his efforts to forge a better working relationship with Russia. Trump and Putin are scheduled to hold talks Monday in Finland, a meeting largely sought by Trump.

After the indictments were announced, top Senate Democrat Chuck Schumer called on Trump to cancel his meeting with Putin until Russia takes steps to prove it won't interfere in future elections. He said the indictments are "further proof of what everyone but the president seems to understand: President Putin is an adversary who interfered in our elections to help President Trump win."

Trump said at a news conference Friday near London with British Prime Minister Theresa May that he wasn't going into the meeting with Putin with "high expectations."

Referring to Mueller's probe, he said: "We do have a - a political problem where - you know in the United States we have this stupidity going on. Pure stupidity. But it makes it very hard to do something with Russia. Anything you do, it's always going to be, 'Oh, Russia, he loves Russia.'"

"I love the United States," Trump continued. "But I love getting along with Russia and China and other countries."

U.S. Senator Dick Durbin (D-IL) released a statement responding to the indictments saying, "The 2018 elections are just four months away. It is past time for President Trump, his inner circle, and Congressional Republicans to stop accepting Russian President Putin's brazen denials and take this threat to our democracy seriously. The Republicans who control Congress must stop threatening Deputy Attorney General Rosenstein and Special Counsel Mueller and instead do their job and pass laws that will deter and punish election interference."

He continued, "Illinois was one of the states that Russian hackers successfully targeted during the 2016 election. Up until today, it was our understanding that Russian hackers accessed approximately 90,000 voter registration records in Illinois alone. Today's indictment stated that the individuals 'hacked the website of a state board of elections... and stole information related to approximately 500,000 voters, including names, addresses, partial social security numbers, dates of birth, and driver's license numbers.' If this is in reference to the Illinois State Board of Elections, we must get to the bottom of it immediately."

The Illinois State Board of Elections said that in July 2016 they notified 76,000 Illinois voters that their registration may have been viewed, and told them to contact the Illinois Attorney General's office if they noticed suspicious activity that used their voter registration information.

"The figure 500,000 referred to in the indictment may have been arrived at using a different methodology prescribed under federal criminal code. As part of our review of the indictment, we will be contacting federal law enforcement to obtain more information on the number referenced in the indictment," the Board of Elections said in a statement.

U.S. Congressman Mike Quigley (D-IL) released a statement in response to the indictments Friday saying, "For almost two years, I've been sounding the alarm that our election infrastructure is nowhere near where it needs to be to inspire confidence in the integrity of our democratic process. The Russians have shown us that our voting technology is outdated and susceptible to attack, and today's indictment of a dozen Russian intelligence officers, including those who conspired to hack Democrats and U.S. election systems, only further reinforces their ability and intentions.

"It is despicable that, despite this news from our law enforcement community, President Trump is still eagerly planning his meeting with Vladimir Putin, the individual who ordered this attack on our nation. President Trump should cancel this meeting immediately and start acting in the interest of our democracy and the American people his government serves. Unfortunately, I suspect that today's announcement from the Mr. Rosenstein will only lead to more of the president's thinly-veiled, partisan attacks on the integrity of our Justice Department-not an honest acknowledgement of the real national security crisis at hand.

"Republicans in Congress also refuse to recognize these vulnerabilities as a legitimate threat and intentionally reversed course to zero out $380 million in election security grants, which I worked to secure in the FY18 omnibus bill. Members on the House Appropriations Committee were given a second chance during the Financial Services & General Government markup, but again refused to recognize this growing threat by failing to adopt my amendment on party lines. Next week, during consideration of the FSGG Appropriations bill, I will re-introduce my amendment to equip states with the financial resources they need to harden their defenses, and it is my hope that in light of today's indictments, Republicans step up to safeguard our democracy from those who wish us harm."

"Today's indictment is a result of the hard work of America's law enforcement and intelligence officials who dedicate their lives to bringing to justice those who wish to do us harm," McCain said. "These revelations add to a body of evidence confirming an extensive plot by Vladimir Putin's government to attack the 2016 election, sow chaos and dissention among the American electorate, and undermine faith in our democracy. And despite repeated warnings from our nation's top intelligence and military leaders, the Kremlin's efforts to weaken our institutions have continued unabated with insufficient action taken by the administration or Congress to strengthen our cyber defenses, safeguard our election systems, and deter further destabilizing activities.

"President Trump must be willing to confront Putin from a position of strength and demonstrate that there will be a serious price to pay for his ongoing aggression towards the United States and democracies around the world. If President Trump is not prepared to hold Putin accountable, the summit in Helsinki should not move forward."