Liudmila Reshetniyk, 83, told her grandson she'd grab a pitchfork and stand up for Ukraine.
WLS
By Stephanie Sierra 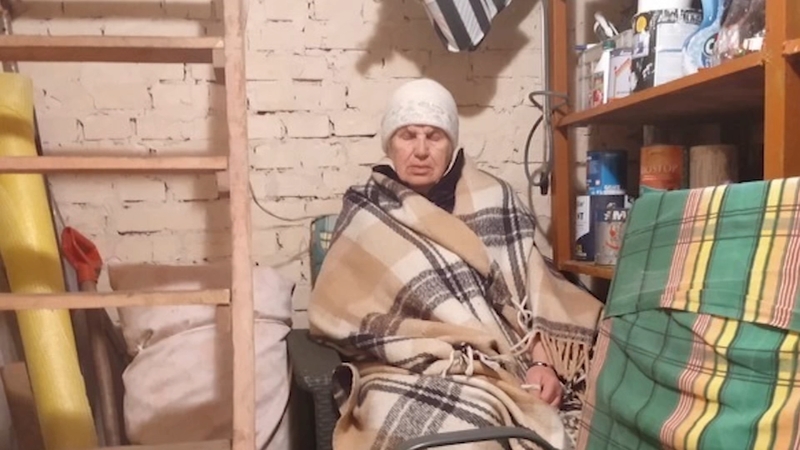 SAN FRANCISCO -- A Ukrainian man living in the United States is desperate to help his family separated in the middle of the war zone in Kyiv.

"They can hear explosions day and night," said Slava Chupryna, who is watching the devastation unfold through pictures and phone calls.

Chupryna, who lives in the San Francisco Bay Area, told our sister station KGO that he is struggling through sleepless nights as both of his grandmothers were recently separated from his family. He checks in with them every couple hours -- often hearing bombs go off in the background.

"Part of my family has been hiding out in the subway system in Ukraine," he said. "The rest of the family has a bunker right outside Ukraine."

As the war in Ukraine continues, we are hearing the story of a woman who is 39 weeks pregnant and hiding in bomb shelter.

He said neither of his grandmothers is a stranger to war zones, having grown up during World War II.

Liudmila Reshetniyk is one of them. She's living out of a tiny 8-by-16-foot bunker beneath their home. Every day she takes turns cooking meals in frigid temperatures wearing a bullet-proof vest. At age 14, she was accustomed to hearing bombs go off in the factory she worked in during the second World War.

Now, at age 83, she told her grandson she's still ready to fight.

"She is a true survivor, she will do everything possible to defend Ukraine," Chupryna said. "She said if she has to, she will grab a pitchfork and go stand up for Ukraine."

Chupryna said his other grandma has left the subway system -- where thousands of people are sheltering from attacks -- and is now trying to find her way back home.

"She just explained to me she just wants to be comfortable and says if she has to die, she has to die .. .that's how she put it," he said. "Truly looking in her eyes and seeing that fear broke my heart."

That fear was compounded with separation. Chupryna's parents are both coaches for the Ukrainian national rowing team and arrived in Turkey for a training camp days before the explosions hit Kyiv.

"It's very scary for these athletes, they have a lot of younger families ... my dad is trying to distract them as much as possible with a lot of workouts," said Chupryna.

HOW TO HELP: List of nonprofits responding to the crisis in Ukraine
EMBED More News Videos

With hundreds of thousands of Ukrainians turned refugees in less than a week, many around the world are wondering how to help amid the onslaught.

His mom and dad are hiding out with 20 Ukrainian athletes who are all separated from their families with little access to search for them -- since most of the bridges into the city have been destroyed. The uncertainty is increasingly painful, but Chupryna is holding out hope his family will find each other and get to safety.

Chupryna has sent out a petition that has already gathered nearly 800,000 signatures as of Tuesday night from people across the world asking NATO to close the airspace over Ukraine.

Nearly 800,000 people have fled Ukraine to neighboring countries since Russian forces invaded the eastern European country on Feb. 24, according to UNHCR.