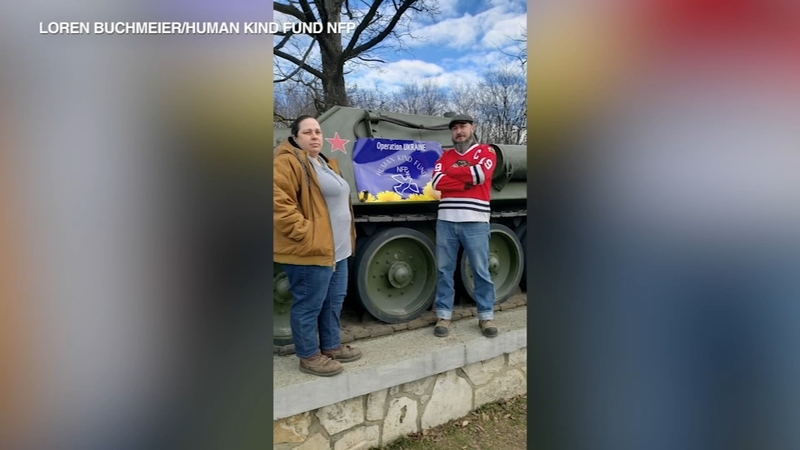 MUNSTER, Ind. (WLS) -- A Chicago area man is on the ground in Poland helping with the Ukrainian refugee crisis.

The former army sergeant made the decision to leave his home in Munster, Indiana almost two weeks ago because he says he was compelled to make a difference in person.

When we first introduced you to retired Army Sergeant Loren Buchmeier as he was readying for his trip to the Ukrainian border. Now he's in Poland working to help refugees first hand.

"They're exhausted. They've been through so much," Buchmeier said. "Especially in the recent days and weeks, the people coming now are fleeing regions surrounded by Russian troops."

RELATED | How to help Ukraine amid Russian attacks

His team drove through the gridlock of refugees to the Slovakian border to help before heading to Poland.

Now he's collecting more supplies, like propane tanks and lights, and sorting through metric tons of clothes for newly arrived refugees in Tarnow, Poland less than a two hours' drive from the Ukrainian border.

"It speaks a lot to the character of these people who are struggling and you know it's really heartbreaking," he said. "But they're prevailing and they're doing what they have to do."

And while Buchmeier is on the ground working in Poland, he has a lifeline here at home in Indiana.

"I'm still worried about my husband," Loren's wife Alisa said, but she is proud of the work he's doing.

"The idea that they're helping and pulling people out as quickly as possible is, it just makes my heart swell," she said.

And she's doing her part from home.

"They're just doing as much as they can there to help humans in need, which is what we all should strive for," she said.

"We all wish we could be doing even more," Loren Buchmeier said.