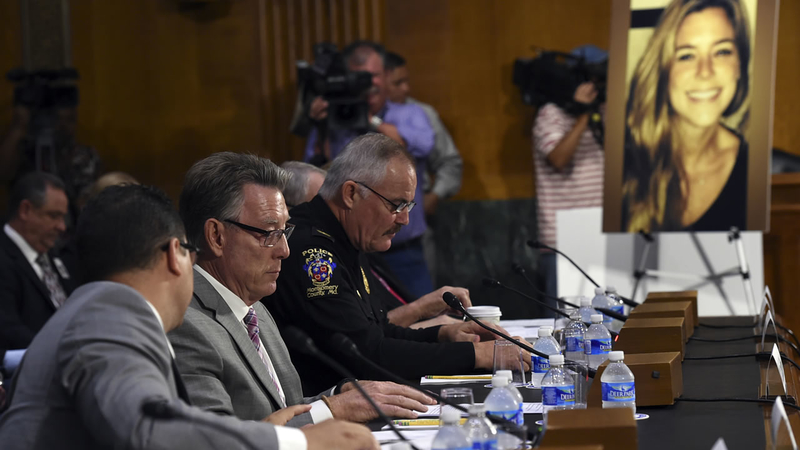 SAN FRANCISCO -- Urged on by anguished testimony from the father of a murder victim, Congress plunged into a heated debate over immigration on Tuesday as GOP lawmakers vowed to shut down funding for so-called sanctuary cities like San Francisco that shield immigrants from deportation by federal authorities.

The father of a San Francisco woman who was fatally shot at Pier 14 testified in Washington, D.C. Tuesday pushing for immigration reform. Kate Steinle's father testified about sanctuary laws. "Suddenly a shot rang out, Kate fell and looked at me and said, 'help me dad.' Those are the last words I will ever hear from my daughter," Jim Steinle said.

It was an emotional day of testimony, especially for Kate Steinle's family, who traveled to Washington D.C. to share her story, all with the hope of preventing future tragedies like hers from ever happening again.

Jim shared with the Senate Judiciary Committee what he'll remember most about his late daughter. "Kate had a special soul, a kind and giving heart, the most contagious laugh and a smile that would light up a room," he said.

The man accused of shooting her, Francisco Sanchez, has several felony convictions and had been deported five times before the shooting and the city's sanctuary law helped protect him from deportation. "We feel strongly that some legislation should be discussed, enacted, or changed to take these undocumented immigrant felons off our streets for good. We would be proud to see Kate's name associated with some of this new legislation. We feel that if Kate's loss saves one daughter, one son, a mother, a father -- Kate's death won't be in vain," Jim said.

Powerful testimonies before the Senate Judiciary Cmte. this AM. Nearly every seat in the room is taken. #KateSteinle pic.twitter.com/gVrBBqvHYn

Senators in Washington D.C. took aim on sanctuary city policies like the one in place in San Francisco. "The local jurisdiction must cooperate with federal authorities if federal authorities ask them to hold the individual," Senator Dianne Feinstein said.

The San Francisco Sheriff's Office did not inform U.S. immigration officials upon the Sanchez' last release. "Unfortunately due to disjointed laws and basic incompetence on many levels, the U.S. has suffered a self-inflicted wound in the murder of our daughter by the hand of a person that should have never been on the streets of this country," Jim said.

Feinstein met with Steinle's family in Washington D.C. Monday. Feinstein says she supports a bill requiring state and local law enforcement to notify federal officials of an undocumented immigrant who has been convicted of a felony and when they're being released. "The man who killed Kate is a classic case of multiple felonies and prior deportations and a simple phone call would have been enough, but that did not happen," she said.

Steinle's sister-in-law Amy Warehouse found comfort hearing other families testify, telling similar, heartbreaking stories and adamant that something needs to be done. "We feel like right now since this is so recent and so raw that we have the fuel to kind of help these families fight," she said.

But critics also voiced their concerns saying immigration policies should be designed to prevent crimes, rather than encourage them. "I pray we avoid criminalizing or casting collective blame on entire communities for the actions committed by one or even a small number of individuals," National Latino Evangelical Coalition spokesperson Rev. Gabriel Salguero

Jim will testify before a house immigration subcommittee on Thursday and up for discussion are policies related to sanctuary cities.

The House will take up a bill this week blocking federal funding for jurisdictions that resist turning over immigrants to federal authorities. A similar proposal has been advanced in the Senate, but it's unclear how far it will go.

It requires the sheriff to immediately rescind his department's gag order that bans communication with federal immigration authorities.

It would require the district attorney's office to prosecute any outstanding warrants prior to transporting a prisoner to San Francisco.

Sanchez pleaded not guilty to Steinle's murder, but told ABC7 News he did fire the shot that killed her.

Steinle's brother Brad released a statement saying: "It's time for those in power to come together and agree on a policy that is good for our country and keeps Americans safe."

ABC7 News reporter Chris Nguyen, who is in Washington D.C. for the hearing, noted how family members seated behind Steinle could be seen holding hands, and gripping each other closely.

Click here for full coverage on the Pier 14 shooting.

Steinle's family and coworkers have set up online fundraising pages to raise money for charities that were important to her. Click here for details on her family's page and click here for information on her coworkers' page.