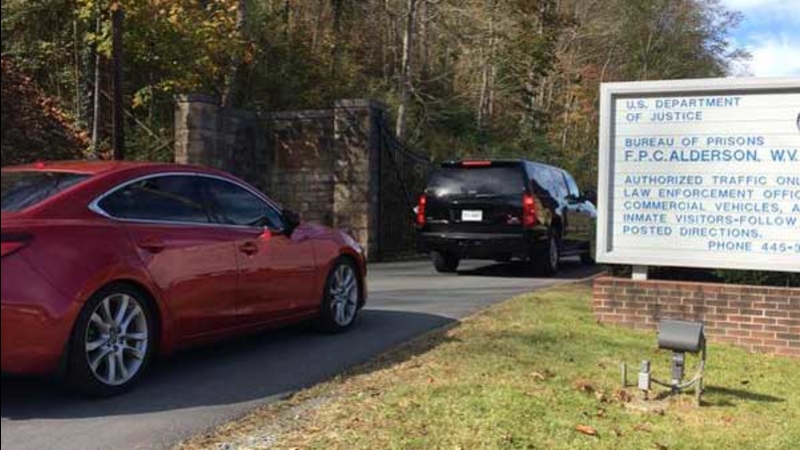 The wife of former Illinois Congressman Jesse Jackson Jr. will serve her one-year sentence at the federal prison camp in Alderson, West Virginia.

On Tuesday morning, Jackson hid her face in the back while her husband rode shotgun. The drive to prison is now a familiar one for this former power couple.

There are no fences or metal bars at this minimum security facility nestled in the picturesque Allegheny Mountains. The grounds are more akin to a boarding school than a prison.

"It's not a difficult place in terms of being hard or dangerous or scary. Today is the scariest part, when you don't know what's going to happen," said Brian DeRouen, Alderson Hospitality House.

Inmates live in large dorms. They sleep in bunk beds and are assigned work details. Newbies usually work in the dining hall or on landscaping duty.

Jackson's first hours in federal custody included a strip search and drug test. But the perks of the place, according the inmate handbook, include a sunbathing area, intramural volleyball squad and the opportunity to care for and train puppies.

Brian DeRouen runs a boarding house for inmates on their way in or out of Alderson. He says women of privilege often have the most difficult time.

"Women who come in saying 'nobody tells me what to do,' we try to help them understand that attitude is going to make it a lot harder," DeRouen said.

Alderson is where Martha Stewart served her time - and it's how the prison earned the nickname "Camp Cupcake."

Like Stewart, Jackson and her husband had a lot going for them when they ran afoul of the law. The Jacksons admitted to spending $750,000 in campaign money on themselves, buying everything from furs to a refrigerator for their Washington, DC home.

A federal judge allowed Jackson Jr. to serve his sentence first so the couple's two kids wouldn't be without a parent.

"My children's family's friends have been rallying around us. There are some things that I have to learn to do like pay bills, which is not an assignment that I've had in the last 30 years of marriage to Sandi," Jackson Jr. said in June.