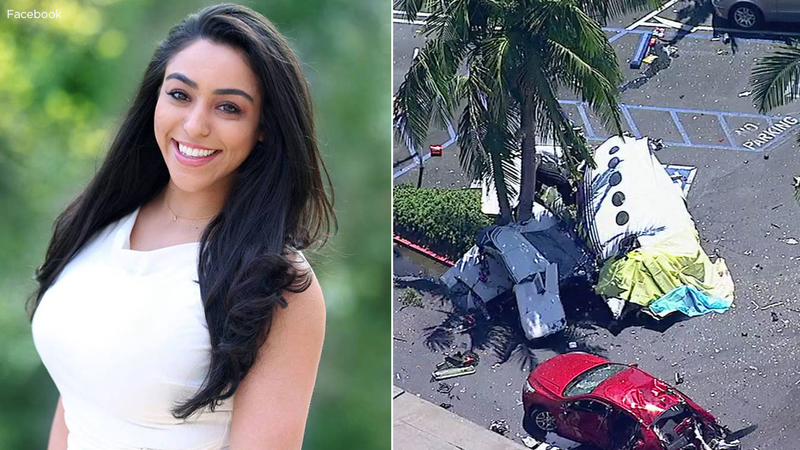 SANTA ANA, Calif. -- Five people were killed when a small plane they were in crashed Sunday afternoon in a Santa Ana parking lot near South Coast Plaza.

The incident occurred at 12:28 p.m. in the 3800 block of Bristol Street, a spokesperson for the Santa Ana Police Department said, adding that no one on the ground was injured.

According to the Federal Aviation Administration, the twin-engine Cessna 414 aircraft declared an emergency before slamming into the parking lot, just feet away from a Staples store.

Through a dashcam camera, a driver captured footage of the plane going down.

Dashcam footage shows the moments before a small plane crashed into a Santa Parking lot, killing the five people on board.

Witnesses said the engine cut out as it spiraled toward the ground.

"My godson and I heard the noise, and then I looked up, and it was already lowering down. It, like, lost control, and it was twirling, and the more twirl, the more lower it came down and then we heard the bang," shared witness Connie Hernandez.

All five aboard were killed instantly. Fire officials confirmed all were adults.

Family members identified one of the victims as Nasim Ghanadan, who was a realtor from the East Bay and on the flight for work. They said she was 29 years old.

An undated photo of 29-year-old Nasim Ghanadan, one of five people killed aboard a small plane that crashed in a Santa Ana parking lot on Sunday, Aug. 5, 2018.

Witnesses said they saw at least three injured men at the crash site.

"There was two victims that were partially ejected... so I checked the pulse on both of them. I have some EMS experience, so there was two DOAs," said witness Alex Perkins.

The plane struck at least one unoccupied vehicle, whose owner was elsewhere shopping at the time.

"Nobody on the ground was injured, so I don't know anything about what this pilot did or what he was thinking, but it could have been much more tragic. This is a Sunday afternoon, and we have people shopping, so the fact that there are no injuries on the ground is a miracle in itself," said Capt. Tony Bommarito, a spokesman for the Orange County Fire Authority.

The crash site is just north of the popular South Coast Plaza shopping mall and a few blocks northwest of John Wayne Airport, which was the pilot's destination, officials said.

The plane is registered to the San Francisco-based real estate company Category III and had left Concord, according to an FAA database.

Bommarito said responding firefighters did not encounter any flames in the wreckage.

Crews were working to clean up spilled fuel at the location. Meanwhile, Bristol was closed between Sunflower Avenue and Callen's Common.

The cause of the incident will be investigated by the National Transportation Safety Board, with the assistance of the FAA.