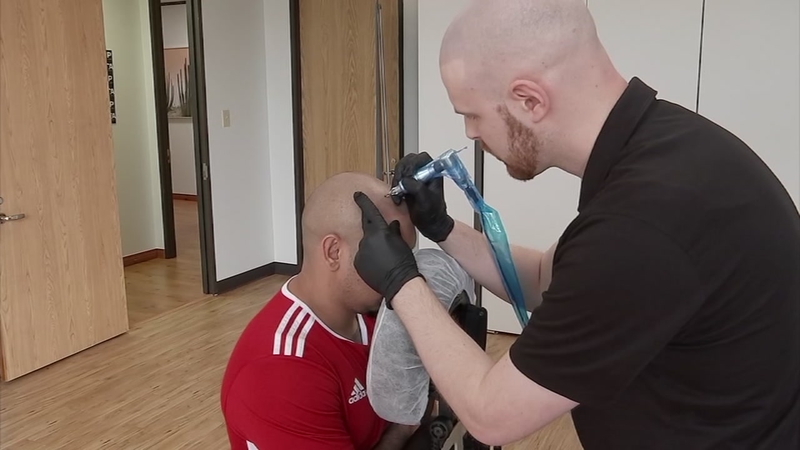 HOUSTON, TX -- If you're thinning up to, you know you'll try anything to get the look of a full head of hair. But now, there's another option.

Scalp micropigmentation is a new technique that uses a tattoo gun to fill that patch of thinning hair.

Kevin Seecharan dreamt of having a full head of hair, but at just 25 years old, his hairline started to recede, which began affecting his confidence.

"You started wearing your hats a little bit more. And it got to the point where sometimes you won't even go out because you don't feel comfortable," Seecharan said.

But then he met Ian Dennis, the founder of Scalpp Houston and lead technician who trains others to perform scalp micropigmentation, which is essentially a hair tattoo.

"We're replicating the hair follicle perfectly using an organic plant-based ink," Dennis said. "With the equipment and the ink, it's different from regular tattoo ink."

The procedure began in the United Kingdom, but Dennis brought it to Houston and has been getting the word out all over town.

Dennis fulfilled Seecharan's dream of having a full head of hair.

"I tried everything, powders, hair replacements, had transplants. And then I heard about this," Seecharan said. "Soon as I had the treatment done, I just saw hairline for the first time since I was a kid."

Dennis said the technique also works for women who want to make their hair look thicker and for men who have no hair.

"Anyone, anybody of any face shape or ethnicity is always going to see an improvement just by having a hairline, which frames their face," Dennis told ABC13 Eyewitness News.

For Seecharan, the technique has been life-changing. He loves his new do, has thrown out half of his hats and his confidence is at an all-time high.

"I do feel it brought back a lot of confidence that I didn't have," Seecharan said.

The price for scalp micropigmentation starts at about $1,600 and varies for each client.

The specialists Dennis works with are all licensed tattoo artists who have specialized in Scalp Micropigmentation.