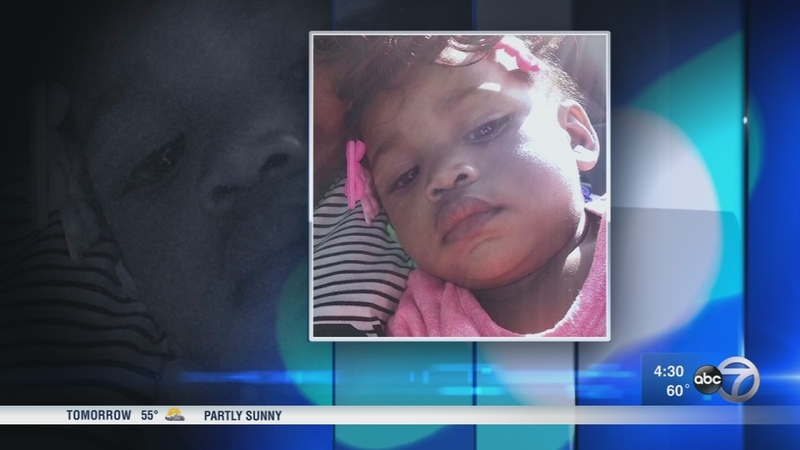 JOLIET TOWNSHIP, Ill. (WLS) -- A funeral was held Friday morning for a 16-month-old girl who was found dead in Joliet Township.

Friends and family gathered to say their final goodbyes as the child's death is now a criminal investigation.

Will County probation officers visited Crosby's home 40 times in about one year and the Will County Sheriff's Office made 14 visits to the home.

Investigators are waiting on toxicology reports to determine how the toddler died.

Relatives hope that justice will be done.

"She's been a baby. She never had a chance. It's hard to explain it. It's hard to see such an innocent life lying there," one relative said.

The Will County Sheriff's office described Semaj's death as "an ongoing criminal investigation," records obtained by the Chicago Sun-Times show.

Previously, authorities had characterized the toddler's death at her unkempt house as "suspicious," but not criminal.

In response to a Freedom of Information Act request submitted by the Sun-Times, the sheriff's office withheld some records, citing "an ongoing criminal investigation."

But the sheriff's office did disclose that officers came to Semaj's home 59 times between February 2016 and April 2017. Forty of those calls were for probation checks.

Two were for welfare checks, one in October 2016 and one on March 4, 2017, records show. In the October call, officers were not able to make contact with the family.

It was unclear if contact with the family was made during the March visit, and officers wrote that a follow-up report would be filed, though one was not disclosed to the Sun-Times.

Semaj and her family moved into the home in the 300 block of Louis about one year ago, according to the sheriff's office, though since her biological parents did not live together, it was not known exactly how much time the toddler spent in the home.

Authorities with the Illinois Department of Children and Family Services had been at the home less than three hours before she vanished to investigate a previous neglect allegation. The investigators saw "no obvious hazards or safety concerns" for the little girl or her two brothers before they left, officials have said.

An autopsy did not rule on the girl's cause of death, pending the results of lab and toxicology tests. There were no obvious signs of trauma or injury, the sheriff's office said last week, adding they were still "interviewing cooperating witnesses and some family members" on Friday.

Photos released earlier this week by the Will County Department of Land Use appeared to support the characterization that the home was in "deplorable" condition when the child was found dead inside.

But in testimony to the state Senate on Wednesday, DCFS director George Sheldon said the agency doesn't take kids "because of a dirty house."

He told senator, "I think if we walk into a lot of homes, they might be untidy. The child may be loved, and cared for, but they may be poor."

He suggested someone was trying to cover up the death in the Semaj case.

"The child was found, as I understand it, under a couch," he said. "No legs on the couch - the child doesn't crawl under the couch. So obviously something is going on and apparently there was an individual or individuals who attempted to hide that fact."

Some state lawmakers are now criticizing the Department of Children and Family Services (DCFS), after Semaj's death.

Hours before her disappearance, DCFS caseworkers were in the home, following up on an child neglect investigation.

State representatives Mary Flowers and Lashawn Ford are calling on DCFS investigators to do a better job.

The lawmakers are calling for a full investigation into the DCFS practices.